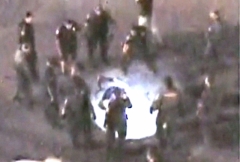 April 20, 2012 (San Diego) – San Diego resident Anastasio Hernandez Rojas was beaten and Tasered to death in a 2010 incident involving Border Patrol.  Tonight at 7:30 p.m. members of his family, civic and faith leaders will gather to watch new footage on “Need to Know”, a film that will raise the issue of border brutality to national attention.

The screening will take place at Equality Alliance, 3750 30th Street, San Diego and will also be streamed live at 7:30 p.m. at www.bringjusticehome.us.

Since 2010, Border Patrol agents have killed at least eight residents of border communities and left several others seriously wounded.  While the Border Patrol has contended the killings were justifiable, the Southern Border Communities Coalition is asking President Barack Obama to direct the Department of Justice to conduct an open and thorough investigation of all the killings that have occurred since 2010.

I watched the video, and felt sorry for the guy and his family. The killers should be broght to the justice.
Jennifer Miami Beach