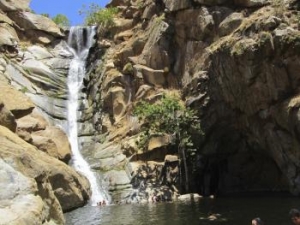 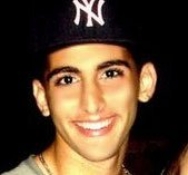 December 18, 2012 (El Cajon) – Parents of Joseph Meram, a 16-year-old El Cajon teen who died July 6, 2011 after falling 80 feet from the top of Cedar Creek Falls in Cleveland National Forest near Ramona, has filed a lawsuit alleging “willful, wanton, or grossly negligent” actions on the part of the U.S. Forest Service.

The suit cites many prior deaths, serious injuries and rescues at the site plus warnings of dangerous conditions just days before Meram's fatal fall. Unlike other fatalities due mostly to daredevil diving (now banned), Meram reportedly lost his footing and accidentally plunged to his death, striking his head on boulders. he lawsuit reveals, “He fell fully clothed with his running shoes and basketball shorts on, and his wallet and cell phone in his pockets.”

For the Forest Service, the challenge has long been determining how to balance increasing demand for public access and safety while still preserving a wilderness experience--daunting and conflicting missions.

According to the suit, Meram was hiking with his younger sister and four cousins. He and one cousin, Fannr Korkis, split off from the group on a separate trail that they believed also led to the pond below. Both had water in the hot weather, but encountered steep terrain with no barriers to protect them from the cliffs. Along the trail, both had difficulty maintain balance and eventually realized they were lost, the suit contends. They asked other hikers for directions and Joseph said a prayer.

After an hour and a half of hiking, Korkis realized that Meram was no longer beside him. He heard a splash and found that Joseph had fallen, striking his head on boulders before landing in the pool below. Meram was pronounced dead in the ambulance on the way to the hospital after CPR efforts failed to revive him.  An autopsy found no drugs or alcohol in his system.

Asked about the suit, U.S. Forest Service spokesman Brian Harris in San Diego responded via e-mail, “Sorry, we are not able to comment on legal matters.”

The suit levels harsh criticism against Forest Service officials.  “Despite a clear trend of increasing fatalities and serious injuries at Cedar Creek Falls (including a notorious history of tragedies over the Fourth of July Weekend), soaring rates of helicopter rescues, and complaints from the local community concerning the dangerous conditions at Cedar Creek Falls, the U.S. Forest Service sat idly and took no meaningful corrective action to make Cedar Creek Falls safer until after  Joseph Meram lost his life,” the lawsuit states.

Moreover, the suit contends, “Time was of the essence, but the U.S. Forest Service ignored the barrage of emails, letters, and phone calls from concerned residents, ignored the pleas from the local District Ranger to close Cedar Creek Falls and address what she termed an `emergency situation’, and failed to undertake mandatory duties to ensure safety. Indeed, weeks, days, and even hours before Joseph Meram perished, the local District Ranger and other local officials pleaded with their superiors at the U.S. Forest Service to address the `emergency situation’ at Cedar Creek Falls.” 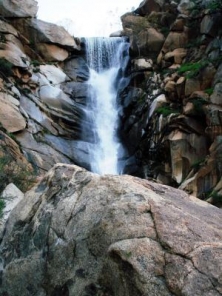 Internal USFS documents reveal that as far back as June 2011, and possibly earlier, the USFS was preparing to close the falls until they implemented basic safety measures to correct dangerous conditions and prevent loss of additional human lives.  Those proposed safety measures included implementing a permit system, installing barriers at cliff faces, improving trail safety, providing volunteer rangers or patrols, installing water fountains, and adding additional signs to warn of dangers and provide directional assistance to the growing hordes of hikers at Cedar Creek Falls.

Freedom of Information Act (FOIA) requests by the family and its legal counsel reveal that the USFS knew of an increasing number of deaths, serious injuries and rescues spanning a decade.  The suit accuses the USFS of “reckless disregard for public safety hazards” at Cedar Creek Falls.

In January 15, 2002, a report to the USFS recommended limiting public access to the falls and accused the USFS of “neglecting…numerous hazards…”  Then in September 2006, a memo to the USFS from Kathleen Kennedy asked for warning signs and noted that too many hikers had perished.  Several dogs have also died on the Cedar Creek Falls trail.

US Forest Supervisor William Metz, in a May 2011 letter to Supervisor Dianne Jacob, reported that there had been 48 helicopter rescues from Cedar Creek Falls in the prior year alone—more rescues than anyplace else in the region.  On one Saturday alone six had to rescued out of 1,000 visitors, five for dehydration, at a cost of $26,000.  He attached a list of recommendations including signage and pamphlets displaying a map and safety precautions.  Other action items including warnings of dangerous trail conditions to direct people away from climbing user-created trails to the top of the falls.

In June 2011, a memjo to District Ranger Joan Friedlander reporter over 40 rescues the prior year in the area and asked, “Can you live with the thought that people may die in this area?”  On June 24, Friedlander followed up with an email citing a need for “emergency action” and indicated that of 48 helicopter rescues the prior year, 90% were related to dehydration and the remainder with dangerous jumping and diving off 70-foot cliffs.  She asked Anthony Rose to forward the info to the Office of General Counsel.  She issued a memo on June 30 and then on July 2, she was copied on a memo with subject line “pleading for help” stating, “Maybe it’s time to permanently close the trail as the Forest Service eventually did in Black Canyon when they had the same problems there.”  On July 3, it was revealed that six rescues were made on July 2.

He was far from the first tragedy at the falls.   On the July 4th weekend in 1998, a young man died after drinking and lost his footing while trying to jump off a cliff. In 2003, a young man broke his back in four places. Another youth  suffered paralysis..  On July 8, 2005, a 17-year-old broke his neck diving into the pool, after which the USFS put up a sign to warn of danger. But it didn’t prevent a 26-year-old from becoming paralyzed after jumping off the 75-foot-cliff in September 2005 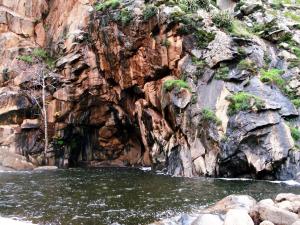 Despite these tragedies, there were no Forest Rangers or volunteers helping direct park visitors on the 4th of July weekend when Meram suffered his fatal fall.  In late June, just days before the tragedy, ECM writer Elena Pena hiked the new trail and videotaped people jumping off rocky cliffs, despite the dangers.

Ironically, the USFS drafted a closure order that was in near-final form in June 2011—but did not implement it until July 8, 2011, two days after Meram died.

The suit contends that the USFS , eager to get grant money from the San Diego River Conservancy, for trial improvements at the falls, rushed through the project while ignoring requirements of the National Environmental Policy Act and the Appeals Reform Act . Had the requirements been followed, public safety impacts would have been analyzed in depth, the suit contends.

The USFS made $1.5 million in improvements to the trail prior to Meram’s death. But those had unintended consequences.  With access made easier from Ramona by the new trail, many more visitors thronged to the falls, which became a party area for local youths, also attracting elderly people, visitors with babies and dogs, resulting in many more rescues in the extreme heat.  Water was not turned on at the trailhead due to problems getting agenci 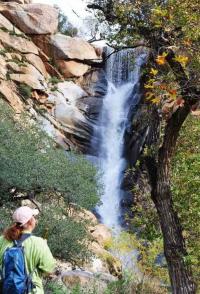 “The Forest Service was trying to do the right thing and improve the trail,” Sheriff Bill Gore told ECM on July 9, 2012, “but they created a gigantic problem.” The improved accessibility resulted in hundreds of cars parked in the Ramona Country Estates neighborhood and attracted teens with coolers to hike down, drink beer and party at the falls—once a destination mainly for serious outdoor enthusiasts in peak physical condition, Sheriff Gore noted.

In a July 6 2011 interview shortly after Meram’s death, Harris told ECM that the Forest Service had taken some precautions to protect public safety.  “We beefed up law enforcement and we posted signage. People are no longer allowed to consume alcohol at the waterfalls sites or to jump, dive or climb on the waterfalls themselves,” he said, adding that the ban applies to all waterfalls in Cleveland National Forest, including Three Sisters and Mildred Falls as well as Cedar Creek. Overnight camping was also prohibited.

The falls were closed for nearly eight months following Meram's death.  On April 1,2012 the Eagle Peak trail reopened, but the Ramona trail remains closed.  On April 2, an ECM writer hiked the reopened trail and reported new signage warning against climbing cliffs or hiking to the top of the falls.

Since the reopening, at least one additional death has occurred; a 19-year-old died of heat exhaustion on July 9, 2012 as ECM reported.

The family sent a claim for damages on November 22, 2011 but received no response after six months, then filed suit on October 26, 2012.

Cedar Creek Falls has been described by the World of Waterfalls website as likely San Diego’s  “most spectacular” waterfall, plummeting 80 feet into a verdant green pool that has long been a popular backcountry swimming hole. The  vista may come as a surprise to many county residents, looking more like a scene off a tropical island than what one might expect to find in a rural area in a semi-desert climate.

Cedar Creek Falls for years was a best-kept secret and favorite destination among serious local hikers, until YouTube videos and online sites began touting the spectacular destination. Now some fear that all may suffer the loss of this local treasure. 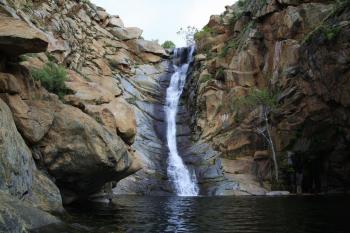 A poster named  Trail Hiker summed up that sentiment in this remark left at a Ramona Patch.com article on the tragedy. “Well now the family is suing the forest service and there is a high likelihood that they will close the whole area indefinitely.”

In November 2011, ECM photographer Dennis Richardson, who has been hiking to Cedar Creek Falls since the 1960s, had this to say.  “To make a dangerous place like Cedar Creek Falls inviting to the careless public by making the trail easy to travel was a wrong choice made by the Forest Service,” he observed, adding that the new trail brough in “gang types, violence, graffiti, trash, crime, and now the falls [area] has become an attractive nuisance which resulted in a long closure.”  He voiced fear that if the new trail remains open, “law enforcement officers will need to be patrolling the area on a daily basis” and that fences, barricades and restricted area signs will ultimately be posted, “prohibiting people from the freedoms we have enjoyed for generations.”

He recalled that in the 1980s, when Barona Indians closed access off at Four Corners and a locked gate was installed on the east side on Eagle Peak Road, access to the falls became difficult.  He believes the Forest Service should block the new trail and replant with native vegetation.

“Let Cedar Creek Falls be for the advanced hikers,” Richardson concluded, “the outdoorsmen who are willing to hike all day to get there and those who treat nature with respect.”

If all the dangerous places in the wilderness--state and national parks, ect.--were closed, Americans would never (could never) leave the city. Hazards go with the territory. Period. What this story really points to is the insanity of American tort law.