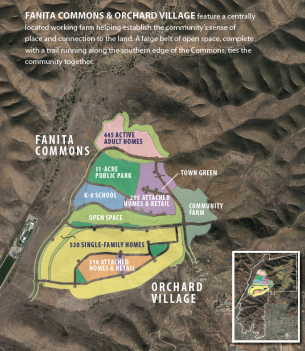 July 5, 2018 (Santee) -- The developers of the Fanita Ranch residential project mailed out a slick brochure last week describing their plan for the 2,600- acre site and inviting residents to tell them what they think of the project that would add about 2,900 new houses to the city of Santee.

The goal is to give residents a clear picture of what the development will look like, and how it could benefit the overall community, said Jeff O’Connor, director of operations for HomeFed Corp., the public company that acquired the parcel in 2011 out of bankruptcy for about $13 million.

“We’re trying to get the word out to all the citizens of Santee about what we’re doing,” O’Connor said. “We want to make sure the residents know what Fanita Ranch is and what we’re doing.”

Besides the 18-page color brochure that highlights sustainability and open space at the swath of land that makes up about a quarter of Santee, developers are scheduling a series of public meetings to give residents a chance to ask more detailed questions. The meetings will begin later this month and continue through next year when the City Council is expected to review the project.

HomeFed submitted its development application for Fanita Ranch to city planners about three weeks ago. As part of the process that could last up to two years, the company must complete an environmental impact report that describes in great detail all of the impacts from the largest home project in Santee’s history.

Topping those impacts and a certain sore point for most Santee residents is the increase in traffic emanating from the area north of Santee Lakes, and certain to further clog the city’s streets and State Route 52, which is already overburdened during peak commute times.

O’Connor said the developers promise to make significant improvements to SR 52 and key arterials including Mast Boulevard, Fanita Parkway and Cuyamaca Street in advance of the project’s completion. Those improvements include adding a new westbound lane on SR 52, updating the Mast Boulevard on-ramp to a high-capacity on-ramp, and creating a new lane going eastbound at the bridge crossing the San Diego River.

With those improvements, a traffic study paid by HomeFed found that the highway will have four times more capacity than the trips generated from the new residents. “That means that traffic will be much better with our plan than without it--we will relieve existing traffic congestion with capacity improvements, including Mast Boulevard,” O’Connor said in the letter attached to the brochure.

HomeFed has been working with Caltrans and SANDAG, the San Diego Association of Governments, the city-county group that makes major transportation decisions, to accelerate a timetable for adding a lane to SR 52 ahead of its scheduled expansion in 2050. O’Connor said he is aiming to get approval for the expansion about the same time that the city approves the EIR on the project.

O’Connor estimated such improvements would cost from $20 million to $30 million, but declined to state how much HomeFed would contribute. Much depends on how much in state and federal grants are obtained, he said.

Santee Councilman Stephen Houlahan said if HomeFed wants to curry favor with residents, it should make the highway and street improvements before the project is approved.

“That’s just a stupid thing to do,” O’Connor said of Houlahan’s proposal. “It makes no business sense.”

Houlahan along with local environmental group Preserve Wild Santee, sponsored two citizen initiatives that recently turned in signatures to the Santee city clerk. He said the Santee General Plan Protection Amendment got some 4,400 signatures, while a term limits amendment got about 4,000 signatures. The minimum needed for an initiative to qualify for the November ballot is about 3,250.

The process now the review and sign-off from the county Registrar of Voters, which could take about a month, Houlahan said.

If it’s approved by voters, the general plan initiative would require that any new development that involves a change in zoning use or increasing current zoning limits would trigger a public vote.

The other initiative would establish a limit of three terms or 12 years for members of the city council. Santee currently has no term limits.

On Santee’s drawing boards since the early 1980s, Fanita Ranch has gone through lots of changes. The original plan called for about 14,000 homes. In the early 2000s, Barrett American had a plan approved by the city for about 1,400 homes, mostly on large lots. When the financial crisis of 2008 hit, that developer went belly up.

Enter HomeFed, which has been a major home builder for San Elijo Hills in San Marcos and at Otay Ranch in Chula Vista. The company has spent much time and money designing what it says is a project that is cutting edge in terms of its retention of open space and hillsides (it says 76 percent will remain untouched), parks, solar use, and a working farm, all of which will be open to the public.

“We’ve taken a lot of time on this development because we want to get it right,” O’Connor said.

Asked about the prospects for Fanita Ranch once it goes before the Santee City Council, he predicted, “I absolutely think they will approve it.”