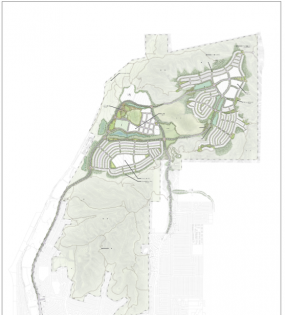 January 20, 2018 (Santee) -- HomeFed Corp., the developer of Fanita Ranch in north Santee, says its plan will preserve about three quarters of the 2,600-acre parcel as open space, while nearly doubling the number of houses it seeks to build on the site.

The plan submitted to city planners last year shows sites for 2,949 houses, compared to about 1,400 houses approved by the city in a 2007 design.

“The plan calls for open space of about 1,600 acres, which is about 75 percent of the site, and that part’s good. That’s phenomenal,” said Jeff O’Connor, director of operations for the Carlsbad-based firm. “Usually large projects like this will have no more than 40 to 50 percent open space.”

None of the units will be designated as affordable housing. Attached homes are expected to be priced in the $400,000 range, with detached single-family homes in the $500,000 to $750,000 range depending on size, O'Connr advised.

HomeFed’s plan for Fanita Ranch, which takes up about a quarter of all of Santee, calls for pushing development north to three areas that are expected to be built in four phases over what could be decades, said O’Connor.

For a comparison, San Elijo Hills, another HomeFed residential project in San Marcos, obtained its entitlements in 1997, and some 35 lots are left to sell in the 3,400-unit property, he noted.

The first planned phase, called Fanita Commons, entails the building of 600 to 700 houses, a grammar school, a fire station, and a 30-acre farm. “We’re actually building our community around the farm. This is all about putting the land to work, about sustainability,” O’Connor said.

The farm is to be privately-run, but would sell its produce to residents and visitors. Fanita Ranch won’t be a gated community. On the contrary, the project seeks to attract public use of its extensive trail systems and parks.

Included in the first phase are 445 units designated as “age qualified” or limited to seniors. The concept is to provide housing to grandparents of young family buyers so they can drop in to see their grand kids, O’Connor said.

Despite a clear effort to resolve existing traffic problems and win over local support, many Santee residents aren’t thrilled about any new housing project that comes with more traffic.

“The reality is that this will put a huge amount of traffic on Santee’s city roads that are already clogged,” said Van Collinsworth, founder of Preserve Wild Santee, a nonprofit group opposed to any development at Fanita Ranch.

Collinsworth said studies show the proposed project would generate an additional 34,000 trips daily on to local roads and highways. “It would be just devastating to anyone trying to commute,” he said.

Collinsworth said HomeFed could still make a nice profit on its $12 million investment made in 2011 when it acquired the land out of foreclosure, and by selling it to the city to so that it remains open space.

Why not work with the San Diego Association of Governments (the regional planning agency) to acquire the property and keep it as open space, which would also provide a security buffer to the Miramar Marine Corps base next door, Collinsworth asks.

Well aware of an already dire traffic situation during peak commute times, HomeFed is proposing to add another lane on westbound Highway 52, bringing it to four lanes from Mast Boulevard to Santo Road. It’s also seeking to add a third lane on eastbound 52 past Mast Boulevard, resolving another bottleneck during the afternoon commute.

In addition, it also wants to redo the surface street interchange off Mast and West Hills Boulevard, and plans to expand both Fanita Parkway and Cuyamaca Street, the two main access roads to the project. The company has been working with Caltrans to devise a highway improvement agreement to share paying for the improvements with federal, state and local funds, O’Connor said.

Santee Councilman Stephen Houlahan said he has serious concerns about the additional houses and the impacts on local streets from Fanita Ranch. A tally of recently completed housing and pending residential projects brings the total in the past few years to about 1,000 new units, he said. Adding about 3,000 more to the mix would create an intolerable situation, Houlahan added.

Promises for infrastructure improvements made by other residential developers including Weston (formerly Castlerock) still haven’t been done, so Houlahan is skeptical of HomeFed’s intention to make improvements as it builds out the project. Instead, street improvements should be made before housing construction starts, he said.

Mayor John Minto takes a measured approach to Fanita Ranch, saying he’s not focused on the proposed number of units, but rather on the impacts.

“I’m always asked how many houses I think are appropriate, and I say the number of houses isn’t the issue. The issue is whether or not the traffic and the environment are taken care of,” he said.

Minto has met with HomeFed representatives and directed them to work with environmental advocates “to make sure they take as much care as possible not to damage the environment and to have as small a footprint and possible and to create a plan to address our heavy traffic issues.”

He’s not opposed to more houses being built, as there’s a clear need because of the city’s growing population. But he also wants new development to come with the infrastructure to handle the increased population.

O’Connor said his firm has had extensive experience doing large scale projects, and thinks the revised plan for Fanita Ranch will impress most residents. “We’re doing the kind of sustainable community the residents of Santee will be proud of. Most people will love our development but some people won’t.”

One of the features he highlighted as cutting edge is a planned solar farm at the southeast corner, and having solar panels on all the houses’ roofs.

“We’re not sure if we’ll be able to get to zero (in energy usage) but we’ll be pretty close,” he said.

To inform local residents, HomeFed plans a series of workshops starting in either March or April. The informational gatherings will center on particular issues such as traffic, parks, the environment, and architectural design.

The company is now in the process of responding to comments from city planners on its plan that was submitted in August. Once the city determines the project’s application is complete, HomeFed will begin the work of creating a specific plan, a tentative map, and an environmental impact report. That could take about 18 months, O’Connor said.

This Fanita Ranch Project is by far the single largest housing/community development project in Santee to date. This project will excavate and/or remove several million dirt yards. To provide scale as to how big this excavation will be; the most recent 5 acre private property development on the hillside at the north end of Magnolia Avenue excavated and/or removed approximately 60K dirt yards. The number of trucks and construction equipment needed to move this much dirt through our community will be enormous. Do the math, one dirt truck hauling 100 dirt yards X 10 trips per day X 365 days a year divided X 1,000,000 dirt yards = 3.65years. It will be necessary for the Fanita Ranch Project to completely re-evaluate their outdated proposal as traffic, infrastructure and capital requirements have changed. Simply widening the roads and re-sequencing the traffic lights won’t mitigate or eliminate the impact of a project this size on our community. Civil capacity and geography must change as well.
Right now, before anyone moves into the new Fanita Ranch development we are backed up for miles waiting to get on the freeway. Magnolia entrance and Cuyamaca entrance are out of the question as you would still wait for at least 30 minutes to get through the 125 bottleneck. And this will add approx. 3k homes at a price that will require at least 4 adults in each home working. This will add at least 4 cars per household and all waiting to get on the freeway with the current residents. How does this make any sense at all? I have often wondered how the parents of West Hills high school get their kids to school on time if they are driven. They have to wait in the same traffic that is sometimes backed up east of Santee lakes. This is beyond a bad idea. But it looks as though we have no choice in the matter. Our beautiful city will become so overcrowded the grocery stores will not be able to keep up with the demand. The schools will be over crowded as well. I am disappointed that this has been allowed to happen despite out protests.
The real issue and problem that we have in Santee is a spineless and gutless city council. They have as much strength and good purpose as a wet piece of one ply. Pathetic.
O'Conner saying we the people of Santee would be ok with new housing is as absurd as anything I have heard lately. It really ticks me off when someone that doesn't live here thinks they know what we want, think, or feel. These big companies come in here, saying they are GIVING us open space is a joke. We already have that open space. They come in here, make their money and run. They don't give a tinkers damn about what happens to us in the future. Our city council members need to have the gumption to stand up to them and tell them to go to hell. We already said we only wanted slightly over 1000. Now they are coming up with a plan for 2949. I bet you a dollar by the time they get their "wants" it will be over 3000. Stand up, Santeeites, attend council meetings and make your voice heard.

I don't see how endless building and development will benefit current residents. Adding a lane to a road will accomplish nothing, traffic congestion won't go away.