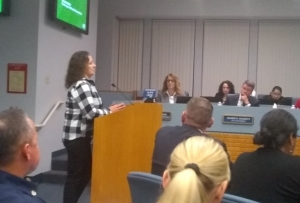 By Mike Allen
Photo: Theresa McCarthy, speaking against Fanita Ranch
February 15, 2020 (Santee) -- In a third public workshop Feb. 12 about Fanita Ranch, the 3,000 unit residential project proposed in northwestern Santee, developer HomeFed Corp. presented an extensive fire prevention plan--including construction of a new fire station and three roadway extensions from the site to main city thoroughfares in case of an emergency evacuation.
While the plans looked nice to some, others remained skeptical that the addition of all those houses will make the city safer during a wildfire.
“You can’t really predict how that fire will behave,” said Michele Perchez, a resident who spoke against the massive project, drawing comparisons to the 2018 Paradise fire. “And you can’t really predict what people will do.”
“We don’t live in a forest, but that can happen here. Our community can be devastated just like Paradise,” she said, adding that if that happens, “that will be on your minds.”
Among a group of about a dozen residents wearing green tags labeled “Public Safety First,” resident Justin Schlaefli said the plans and steps HomeFed has taken will improve the safety for all of Santee. Besides adding a new fire station, he cited the extensive brush defense system, expanded exit roads, and other measures that are responsible ways of dealing with potential wildfires.
“Something is going to happen up there,” Schlaefli said of the 2 638 acre site. “It won’t remain open space forever… Let’s listen to real fire professionals. Let’s not listen to fake firefighters.”
Janet Garvin noted HomeFed is spending enormous amounts of money on all the positive aspects of the project because the developer stands the most to gain.
“The project seems glorious. The slick propaganda that they put out looks really great,” Garvin said. “Who will be the winner in this gamble? It’s probably not going to be us.”
Mayor John Minto told city staffers that he wanted any fire prevention plan that’s created to go well beyond the minimum required for this project.
He noted the last time Santee approved the Fanita Ranch development he was told the fire protection plan was adequate. However, in 2012 a San Diego Superior Court judge ruled otherwise. That plan was for a project of about 1,400 houses. Today the number is 2,949.
“This plan has to go beyond ‘It’s just legal,’” Minto said.
Councilman Ronn Hall asked about the financial liability of staffing and maintaining the new fire station, and the two new fire trucks. 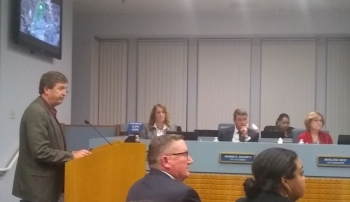 Photo: HomeFed's Jeff O'Connor
"You're not paying for it," said Jeff O’Connor, HomeFed director of operations
O’Connor described the three exits and extension roads from Fanita, connecting to Fanita Parkway, Cuyamaca Street, and Magnolia Avenue, noting that these would have two lanes going out in the event of an emergency. But several residents cast doubt those measures would work if a wildfire triggered a mass exodus all at once.
Minto recounted his experiences dealing with San Diego County’s wildfires in 2003 and 2007, and while plans may not have worked perfectly, he said communities still need to have emergency evacuation plans in place and prepare the best they can. “We also can’t stop living because we’re afraid of a disaster,” he said.
The Council made no decisions on the fire prevention plan, which will be part of the project’s environmental impact report due to be released in March.
Once the EIR is released, there is a 45-day public comment period, followed by a final revision period, bringing the date for the council’s review to sometime past June. But it’s unclear exactly when the Council will vote on the project. A city prepared diagram on the Fanita Ranch process shows the time frame for a Council vote this summer.
The Santee Council also heard from eight nonprofit organizations that are seeking a share of federal funds allocated to all cities above 50,000 in population that can be used for community development block grants.
Santee’s allocation this year was estimated to be $39,737. The eight groups seeking funding through the CDBG program are asking for grants ranging from $5,000 to $20,000, and total $65,000. They are Cameron Family YMCA; Crisis House; Caring Neighbors; Elder Help; Meals on Wheels; Santee Food Bank; Santee Santas; and Voices for Children.
The Council will determine the grant levels for each group at its next meeting Feb. 26.