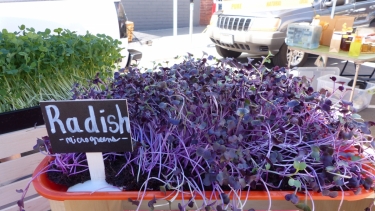 May 4, 2018 (La Mesa) --  I took a trip into La Mesa’s downtown village today to check out opening day of the new Farmer’s Market, which has moved to downtown La Mesa along La Mesa Village.  The market is now operated by the La Mesa Village Association instead of the city, with a new farmer’s market company. 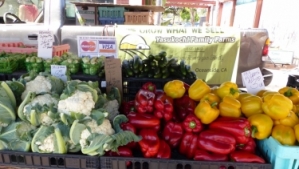 There were many familiar faces between Fourth and Palm, including vendors selling fresh fruits and vegetables, herbs, flowers and items available for tastings ranging from nuts to salsas.

A welcome addition is a golf-cart-style shuttle ferrying passengers to off-site parking, though there was no signage to make clear exactly where to park in the future  to access this service; likely it’s at the old farmer’s market location on Allison Avenue west of Spring Street. 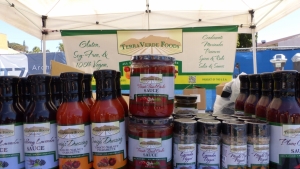 There also some new additions, such as Terra Verde Foods, which offers all natural, vegan and gluten-free gourmet goodies such as blackberry-lavender sauce and blood orange marmalade with brandy.

Crafter’s found at the Crafter’s Corner are now at the Friday  farmer’s market, offering up hand-made items such a 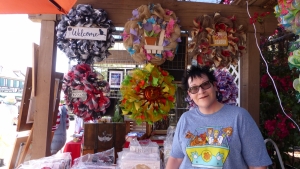 A number of vendor booths are selling foods from piping hot corn  on the cob to tamales, as well as snow cones and ice cream bars,  refreshing on an unseasonably hot day. 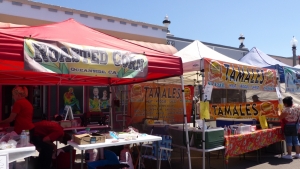 The ice cream products seemed a contradiction of promises made not to serve foods that compete with existing stores or restaurants, such as the hand-made ice creams at Centifoni’s on the same block as the ice cream vendor.

The heat left some vendors’ products wilting just an hour into the market, which starts at 3 p.m. which street closures in effect from 1 p.m. to 8 p.m.

Sheldon’s Service Station had misters on its outdoor patio and other local eateries cranked up air conditioning in hopes of enticing in new customers.

Inside San Pasqual Winery’s tasting room, a young couple from Spring Valley who had come for a wine pickup said they looked forward to heading out 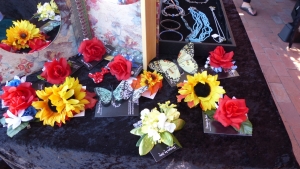 to shop and hoped to find a wider selection of fresh foods than at other farmer’s markets.  A senior citizen who lives in a nearby condominium had walked to the village with her small dog,  but was disappointed to learn that dogs aren’t allowed in the farmer’s market area.

The turnout was sparse at mid-afternoon when I arrived, though the heat may have kept some away. I arrived a half hour early and had no trouble finding parking.  By an hour later, attendance was picking up, though still not crowded.

My son stopped by later, around 5:15, and said the market was busier.  He bought among the last remaining strawberries, along with some other fresh veggies, and was able to find parking on a street near Sprout's Market just a block or two away.  As the village comes to life after dark, it remains to be seen if regular Friday night patrons of local restaurants will turn out, along with regular farmer’s market shoppers and perhaps some newcomers stopping by to see what’s new.

If you stop by the farmer’s market in its new location, consider a visit to a local restaurant or other shops along La Mesa Boulevard and vicinity,  to make sure these anchor tenants in La Mesa’s downtown village will survive and thrive along with the farmer’s, crafters and artisans on hand..

I went with my husband and daughter to check out the Farmers Market but we never made it. After shopping in some of the local boutiques, we walked over to Farm to Table table (and Subway for my daughter) for dinner. We got there around 6:30, found parking very easily in the lot behind the strip, and found it wasn’t crowded at all, just very warm for a May evening. We’re definitely going back and plan to meet up with friends for a group outing.
I hope the market did well. My girls and I couldn't find a place to park within a couple of blocks, so we put off our trip to Beau Bo and went to Casa de Pico at GC instead. Sorry for the blown-off rez, folks.