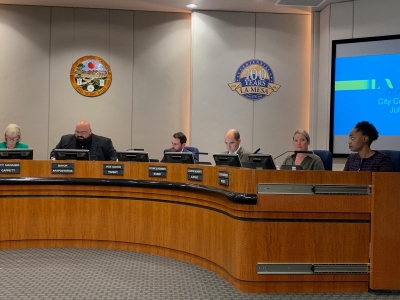 Council votes 3-2 to keep market downtown, but have Beevers Farmers Market run the event instead of merchants’ group

July 27, 2019 (La Mesa) – As foreshadowed at the previous La Mesa City Council meeting, the banner agenda item at this week’s meeting was the fate of the much-beloved farmer’s market. Its location, time, and management were up for debate because the current agreement ends July 30th.

The discussion on the Community Choice Aggregation Technical Feasibility Study was tabled for the next meeting because of the anticipated length of the farmer’s market discussion. The study will cover the feasibility for La Mesa to produce and sell clean electricity from renewable resources to residents, potentially in conjunction with other local cities.

The discussion began with City Manager Yvonne Garrett providing a history and development of the farmer’s market in La Mesa.

Since 1993, La Mesa has sponsored a weekly farmer’s market on Fridays as a means of economic development for downtown, per staff report. The market has existed in three locations: Allison Avenue parking lot, in the Civic Center, and ultimately moved to its current location on La Mesa Boulevard in early 2018.

This move was intended as a trial period. In November, Council conducted a survey of patrons and local businesses to determine if the market’s permit should be extended. Seventy three percent of respondents supported the market. The businesses opposed to the market were some of the food and drink businesses with a few in the service sector, per staff report.

In March, staff presented a range of options for ameliorating some of the conflicting opinions about the viability of the market to fulfill the Council’s original intent – economic development for the downtown area. Council previously decided, by a 3-2 vote, to issue a Request for Proposals (RFP) for the operation of the market, with no limitations on date, time, or location. 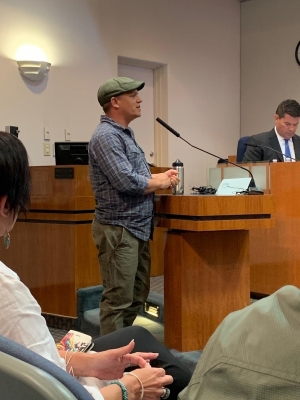 The remaining two submittals proposed keeping the location and time the same: 3 to 7 p.m. Fridays in the downtown village. One proposal was submitted by the market’s current manager, Brian Beevers. Beevers proposed cutting hot-food vendors by half and delaying street closure until 1:30 pm.

Another proposal was submitted by the La Mesa Village Association with Brian Beevers as the manager of the market, as is currently the arrangement. The Association’s proposal would delay street closure until 2:00 pm and reduce hot-food vendors by a third.

Within that hour, community members reached out to East County Magazine expressing serious concern with what they perceived to be Parent’s bias in support of one applicant. An attorney with Californians Aware (CalAware) provided independent analysis of Parent’s actions, suggesting Parent should recuse himself from all future votes pertaining to licensing and permitting impacting land use which affect “his favored contender.” CalAware seeks to “foster the improvement of, compliance with and public understanding and use of, public forum law.” 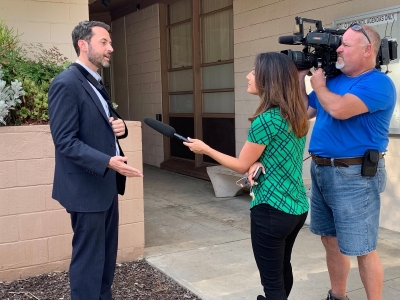 When asked about this analysis, Parent made clear he was not “supporting a specific applicant.” Parent stated he has expressed support for keeping the market in its current location and day because that has been successful. Parent emphasized there was more than one application which would meet those goals and that he had not shown favoritism to either application. The fact that Beevers was associated with both applications which would fulfil Parent’s goals did not change Parent’s analysis: “There are two separate” submittals, Parent underscored.

Parent was not the only councilmember accused of having a conflict of interest. Councilmember Kristine Alessio shrugged off a comment made during public comments which asked her to recuse herself because of a romantic relationship she maintains with a local businessman who has expressed opposition to the market’s current location and times. Alessio directed City Attorney Glenn Sabine to comment on whether she, or Parent, had a conflict warranting their recusal.

With no analysis of the matter, Sabine merely stated that neither had a conflict of interest warranting their need for recusal. Significantly, Both Parent and Alessio are attorneys. When asked after the meeting about the public comments directed at her, Alessio called them a “cheap shot.” 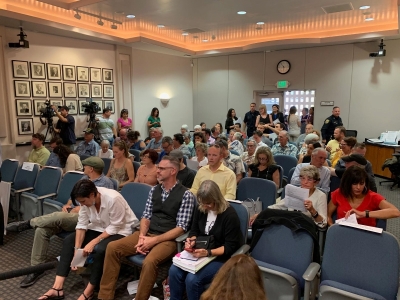 Following three-minute presentations from the applicants, Council turned to public comment on the matter. There were many attendees there supporting the market in its current location and time and supporting Beevers as a capable manager who has grown the market to its current success. So numerous was the support, the Council chamber was at capacity and there were 60 individuals in an overflow room, many of whom were waiting for their chance to speak.

Almost uniformly the public comments emphasized the same points from different perspectives. Farmer’s markets are sensitive to change. Changing times, locations, or days could destroy its success. Sunday was not a viable day for a La Mesa market because many of the most popular vendors have other markets they participate in on Sunday, such as the Hillcrest Farmer’s Market.

Many residents spoke of the community building aspect of the market. It was described as a destination, not just for La Mesa residents, but across the County. The atmosphere resulted in children dancing and dogs and their owners mixing with others. Many people emphasized that they came to the market for items and then stayed to dine at local businesses and to meet new people.

One resident voiced her annoyance with the parking situation, stating that when she comes home from work, she must park up to three blocks away from her home because of the street closures and lack of additional parking.

Mayor Mark Arapostathis stated he goes to the market every Friday and had not missed one. He emphasized that he loves seeing the community engage with one another in real life. He was most impressed with a time that he observed the crowd for 15 minutes and did not see a single person on their cell phone. He was in support of preserving the current market.

Councilmember Bill Baber lamented the inability of residents to compromise with one another. Baber revealed there were many more people and businesses opposing the market than had spoken out, but that some said they were scared to publicly voice their opposition for fear of retaliation, such as loss of business.

Baber saw moving the market to Sunday as the best option. He acknowledged people’s concerns about the fragility of the markets and recognized that a Sunday market may lose some vendors and customers, but thought it was best “to start over” with a new market on Sunday. Baber believed this was the best compromise to make the most people happy or, as he put it “everyone equally unhappy.” Baber seemed to chide the public for focusing too much on the market and lamented the need to table the community choice plan to the next meeting, suggesting that was as if not more important than the market. Many of Baber’s comments were met with heckles and jeers from the audience. 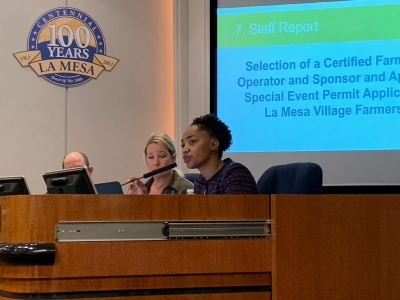 Alessio underscored the fear in business owners who did not want to speak out publicly about their opposition to the market. Alessio shared that her daughter told her not to vote against the market for fear of retaliation and vandalism. Alessio supported Baber’s compromise proposal.

Councilmember Akilah Weber spoke last and waxed poetically in thanking everyone for their thoughtful participation in the process. Weber emphasized that she supported the RFP process in order to have robust discussion and give the most people the opportunity to share ideas about the future of the market. Weber emphasized her previous vote was about transparency, not about moving the market.

Seeming to take a swipe at Parent, Weber emphasized that she viewed their role as requiring an open mind and “not to take a position immediately.” Ultimately, she saw the overwhelming support was for the market “as is.” She said she would support keeping the market in its current location and day. Weber’s final words expressing support for the current market were met with the loudest cheers and applause.

The council voted 3-2 to move forward with a one-year contract for the management of the market under Beevers’ solo application. The motion was made by Parent and seconded by Weber.

The LMVA had earlier voiced concerns that losing operation of the market would mean reduced revenues to fund future community events, such as Oktoberfest and Holiday in the Village, that draw visitors into downtown.  The Council voted at the last meeting to have staff prepare proposals to use a substantial portion of parking revenues to fund future downtown events to benefit the community and downtown merchants.

The Traffic Commission presented proposed modification to its work plan and gave recommendations for its thoughts on the types of applicants needed to fill the commission. The Commission deferred to council on the matter. Parent proposed restricting certain commission appointments to add certain experiences, such as experience as an alternative transit user and experience with climate change or science. Ultimately council voted to make these designations preferred but not mandatory requirements for future applicants.

Baber was selected as the City’s voting delegate to the League of California Cities at their annual conference in October.