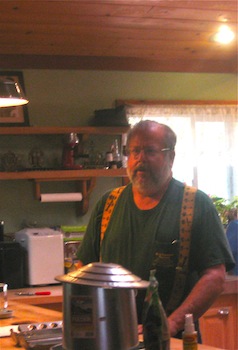 
He then listed five things people need to raise chickens:

(1) protection- fencing and netting from predators and rains,

The best foods to feed chicks are alfalfa, grains and greens, chick starter ingredients. Chicks can be kept on these ingredients for five to six months until they can eat a pellet. They can even feed on worms and bugs.

He recommended that people learn portion control when feeding the chickens. He weighs out two pounds and sprinkles it on the ground for the chickens to eat until they’re no longer hungry. He gives them enough food for 30 minutes.

“If you really want to spoil chickens, feed [them] earthworms in a compost pile,” Tall added.

In the winter, chickens lay fewer eggs. The best thing to do ahead of time is freeze the eggs you get earlier in the year, so you’ll have eggs to eat in winter.

Another audience member asked about keeping rats away. Tall told her not to store food in the chicken coop, or hang a feeding container high up on a wire.

Someone else wanted to know what to do when you’re going away for a couple days. Tall replied, “You can feed them once before you leave. Then  feed them again once you come back. They’ll be okay.”

To find out more about raising chickens in San Diego, view: http://www.sandiego.gov/development-services/pdf/news/keepingchickens.pdf.