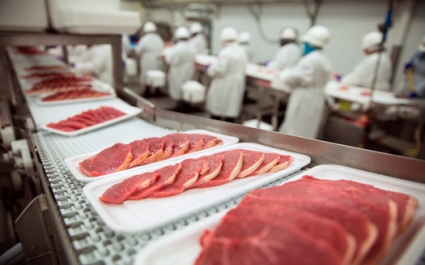 Photo:  Unions across the country say the meat processing industry should have enacted adequate worker safeguards long before the pandemic. (Adobe Stock)

May 1, 2020 (Madison, Wis.) - At least 20 meat processing plants have closed temporarily across the country, including one in Wisconsin, following the spread of COVID-19 cases at these facilities.

And some say President Donald Trump was too quick to sign an order to keep all plants open during the crisis.

In signing the executive order, the president mentioned concerns about how these closings would impact the nation's food supply chain.

But Kara O'Connor, government relations director for the Wisconsin Farmers Union, says even though livestock producers are hurting right now, safety at the plants they sell to is more important.

"Farmers don't want their livelihood to come at the expense of someone else's life, quite literally," she stresses.

Across the country, nearly 20 meat plant worker deaths have been linked to COVID-19.
O'Connor says the lack of safeguards was a concern long before the pandemic, and should be properly addressed before production is at full capacity.
The National Farmers Union has issued a statement citing similar concerns.
O'Connor says the only positive outcome from the president's action, which classifies these companies as essential, is that it might speed up getting more protective gear for workers.
The union is calling on state and federal authorities to ensure that workplace protections are enforced.
"History has shown, time and time again, that large meat processing plants are incapable of policing themselves," O'Connor stresses.
The union also is calling on companies to provide robust testing at the plants, as well as sick leave for those who become infected.