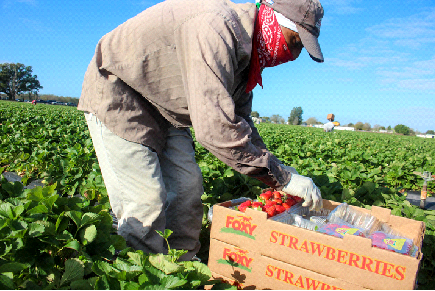 October 24, 2019 (Bakersfield)--- Farmworkers' groups are celebrating the end of at least a decade-long battle to ban a toxic pesticide in California after the state Environmental Protection Agency announced a new deal with manufacturers of chlorpyrifos. The pesticide no longer will be sold to growers in California after Feb. 6.

"It's a very dangerous chemical that can cause harm, especially in brain development, for unborn children and young children who live in close proximity where this pesticide is applied," she said.

Chlorpyrifos is widely used to control pests on a variety of crops, including alfalfa, almonds, citrus, cotton, grapes and walnuts. Farmers still can spray their existing stocks through the end of next year as long as they respect buffer zones. The state has dedicated $5 million for grant money to search for an environmentally friendly alternative.

In 2016 under President Barack Obama, the EPA had decided to ban chlorpyrifos nationwide, but President Donald Trump's first EPA director, Scott Pruitt, reversed the decision against the advice of the agency's scientists. Martinez noted that Dow Chemical, a chlorpyrifos manufacturer, donated $1 million for the Trump inauguration.

"Dow was one of the main contributors to Trump's administration fund," she said, "so it's not surprising that at a federal level, this didn't happen, more for a political reason than anything else."

Martinez said rural Fresno, Kern and Tulare counties are the top users of chlorpyrifos in the state, with especially high usage near the Central Valley towns of Lindsay, Orange Cove and Tranquility.

The CalEPA announcement is online at calepa.ca.gov.

The most vulnerabls people are being exposed to toxic chemicals. They may not complain for fear of being arrested and deported.

Dow like Monsanto is an enemy of our planet. Some of these chemicals don't degrade for a long time. Some insects are good for our environment.