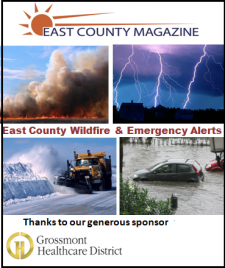 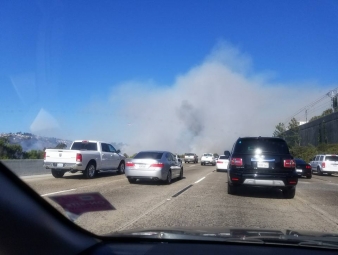 June 3, 2018 (Del Cerro) – San Diego Fire investigators have concluded that a fire that scorched 38 acres in Del Cerro yesterday was started by 12-year-old children playing with a lighter. It has not yet been announced whther the juveniles will face charges, ECM news partner 10 News reports.

The fire reported at 4:09 p.m. in the Adobe Falls area of Del Cerro on Del Cerro Blvd. near Waring Road forced evacuation of 60 to 80 homes on Adobe Falls Road this afternoon and evening.

The fire started in a brushy canyon and swiftly threatened homes, burning east and to within several feet of Interstate 8, forcing closure of the freeway and harrowing moments for motorists.

ECM reporter Rebecca Jefferis-Williamson was driving toward the fire on I-8 and got cell phone photos (top left and lower left) of flames beside the freeway and a wall of smoke confronting motorists.  "The other driver and I didn't know what we were driving into, but we were not stopped from advancing," she reports, adding that orange and black embers and ashes were hitting her car. One ember came through her open window and burned her finger, she added. 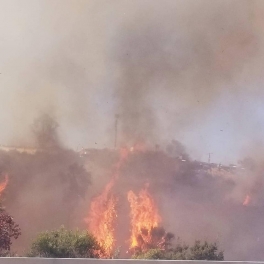 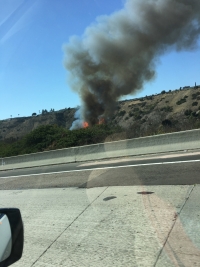 he CHP site indicated many vehicles were stopped on the freeway and some made U-turns on I-8.seeking to escape the flames.  Citizens have called into report their vehicles were too close to the fire and that a motorhome with lots of flammable propane tanks appeared at risk.

Photo, right: Marguerite Elfman was driving past around the time the fire started and photographed this image early in the blaze.

While officers raced to evacuate residents, CHP began  escorting some vehicles on I-8 west off the College exit before ultimately closing all lanes in both directions on I-8 from College Avenue to Lake Murray Boulevard until firefighters brought the blaze under control.

As of this evening, some lanes remain blocked, as do some freeway on/off ramps.

A photo by Mary Prather, below left, shows just how close flames came to jumping the freeway. Fortunately, firefighters were able to contain the blaze and this evening, residents with identification are being allowed to return home. 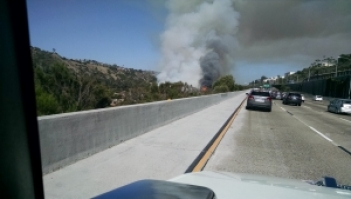 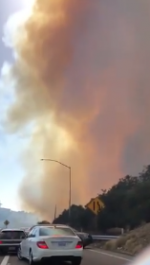 Sign up to receive free East County Wildfire & Emergency Alerts via e-mail at the top right side of our homepage and you can also opt to receive our free weekly newsletter with top news and events in East County. You can also follow EastCountyAlert on Twitter.

We thank the Grossmont Healthcare District for sponsoring our alerts, helping to keep you safe and informed. Tell your friends!

In El Cajon, the smoke was very thick for quite awhile,, although I was able to open windows to allow cool evening air in by around eight O'clock. Not too smoky at that time.