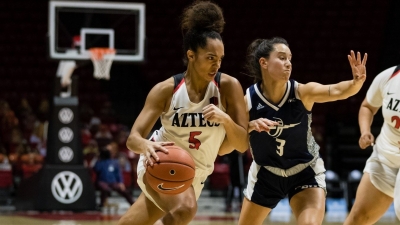 Téa Adams led the Aztecs with a season-high 19 points on an efficient 9-for-10 shooting. Sophia Ramos had a double-double with 15 points and a game-high 10 rebounds while recording five steals, which tied a career-high. Mercedes Staples finished with 12 point and seven rebounds.

SDSU led by as much as 17 points (20-3) in the first quarter while having seven players score.

The second quarter had two scoring runs. First an 18-6 USD run to close their deficit to five and then SDSU was able to finish the first half on a 10-2 run to take a 12-point lead into the halftime break (38-26).

The Toreros went on a 6-0 run to pull within three points (56-53) with two minutes remaining, but Téa Adams and Mercedes Staples combined for an 8-0 run to put the game out of reach.

The Aztecs held USD to 33 percent shooting from the field and a 23 percent clip from three.

The Toreros were led by Sydney Hunter’s 13 points and eight rebounds. Jordyn Edwards had 11 points but was held to 4-for-17 shooting.

The Aztecs forced the Toreros to miss their first 11 shots and held them to 2-for-15 shooting in the first quarter.

The Aztecs never trailed in the game.

The Aztecs have their first Mountain West series next week, playing at Colorado State on Tuesday and Thursday.