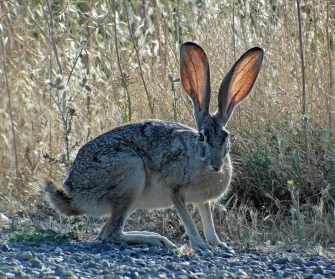 By Miriam Raftery
Photo: Jackrabbit, cc by SA via Bing
July 8, 2020 (San Diego) – For the first time, deadly rabbit hemorrhagic disease (RHDV2) has been found in San Diego County. A wild jackrabbit found dead in Poway tested positive for the disease, Patch.com reports, citing the House Rabbit Society.
A vaccine has been developed and is available on order, so domestic rabbit owners should contact their veterinarian.  The disease can afflict all rabbits, jackrabbits, hares and pika species including domestic rabbits.
Infected rabbits may have no symptoms before suddenly dying, though some may suffer fever, swelling internal bleeding and liver necrosis, according to the California Department of Fish and Wildlife.
All sick or dead rabbits should be reported to state wildlife officials, and do not touch the carcass.  Also report to your veterinarian immediately if your rabbit becomes ill or dies.
The California Department of Food and Agriculture has issued a quarantine prohibiting any rabbit, hare or their products including meat, pelts, hides or carcasses from entering California from areas that have had the disease in the past year. Importing equipment used to process rabbits is also prohibited.
To protect house rabbits, keep them inside at all times. The highly contagious virus can be spread by contact with infected animals or through urine or feces. It can also be spread through insects and through objects such as equipment.
When walking your dogs, keep them on a leash to prevent them coming into contact with wild rabbits. If you have pet rabbits, consider having your dogs wear booties outside or wash their paws when they come indoors, and keep rabbits separated from dogs.
Wash hands thoroughly before and after handling rabbits. Use disinfection practices and leave shoes outside. Also keep insects under control and be sure that your hay or feed sources are not near areas with outbreaks.
The fatal disease has now been found in Orange, San Bernardino and San Diego Counties. The first known case in California was in Palm Springs. The disease had earlier been found in Mexico and the southwestern U.S. states of Arizona, New Mexico, Texas and Colorado.

interesting, two weeks ago found one dead on the driveway in alpine..zero sign of wounds.