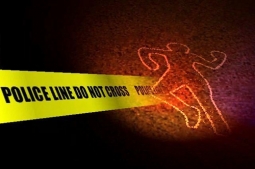 February 2, 2014 (Rancho San Diego) – Yesterday at 11:08 a.m., Sheriff’s deputies from the Lemon Grove Station responded to a report of "shots fired" and a victim lying in the driveway in the 11600 block of Calle Simpson in Rancho San Diego.  Two male suspects were last seen leaving south on Calle Simpson towards Weighorst Way in a black four-door sedan and have not yet been located. Deputies found a  25 year-old victim, whose face and head were covered in blood. The victim's father,  52, also suffered injuries and was bleeding from his right eye.

Deputies learned the victim had been standing in the driveway of his home waiting for his girlfriend when he was approached by a Hispanic male, about 5'11", 160 lbs, wearing a black beanie, blue hoodie sweatshirt and gray pants. “The victim got into physical altercation with this suspect and a second suspect stepped out of a parked black four-door sedan and walked toward them. This suspect pulled out a gun and pointed it at the victim,” said Lieutenant Dave Schaller.

When he heard a gun shot, the victim's father ran outside and engaged in a struggle with suspects. The victim's  mother then came outside and attempted to assist her husband, who was now grappling with one of the suspects.

Once the suspects realized deputies had been called, they fled the scene, leaving behind numerous items of physical evidence. Initial reports are the first victim sustained a wound to his head. It is undetermined if the injury was related to the discharge of the firearm. The victim's father also sustained minor injuries to his right eye. Both were transported to a local hospital for treatment.