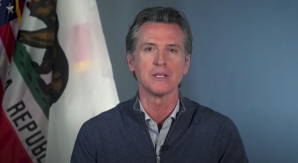 Photo:  Gov. Gavin Newsom was elected governor in 2018 with almost 62% of the vote. Image from video

Newsom will likely face a fall vote in a race that is already shaping up to be chaotic.

Republicans including former San Diego Mayor Kevin Faulconer, governor candidate John Cox of Rancho Santa Fe and transgender activist Caitlyn Jenner have already said they will run to replace him.
The state has not yet formally approved the recall or set a date for an election. Rob Pyers, research director for the nonpartisan California Target Book, forecast a November election with two questions: Should Newsom be removed from office? If so, who should replace him?
This recall bid succeeded where two previous ones faltered.
In March 2020, Erin Cruz of Palm Springs learned her petition effort to oust the Democratic governor had failed. La Jolla physician James Veltmeyer declared his recall bid dead in January after submitting no signatures.
In a statement, Faulconer said: “Californians from all walks of life are seizing this historic opportunity to demand change. Democrats, Republicans, and Independents are coming together to support this recall and get our state back on track.”
He added: “As the only candidate who’s won tough elections and enacted real reform, I am ready to lead this movement. Together, we will turn the page on Gavin Newsom’s failures and begin a California Comeback to reopen our schools, cut taxes for working families, and create jobs for the people of our state.”
San Diego County voters contributed 156,869 verified signatures to the recall drive. The county has nearly 537,000 registered Republicans.
Under California law, officials have until Thursday to provide a final count of valid signatures. Voters will then be allowed an additional 30 days to remove their approval if they change their minds.
But as of Monday, backers of the petition to remove Newsom, a cause celebre among Republicans nationwide, had submitted 1.6 million valid signatures demanding a recall election, said the Secretary of State’s Office.
Newsom, a former lieutenant governor and San Francisco mayor, was elected governor in 2018 with almost 62% of the vote. He would be up for re-election in 2022.
The recall effort targeting Newsom began in February 2020, led by a group called the California Patriot Coalition that opposed Newsom’s liberal politics.
The campaign has picked up steam amid frustration with the state’s COVID-19 vaccine rollout, closed schools and changing public health rules.
“The people of California have done what the politicians thought would be impossible,” said Orrin Heatlie, lead proponent of the recall campaign and founder of the California Patriot Coalition. “Our work is just beginning. Now the real campaign is about to commence.”
Randy Economy, senior adviser and spokesman for RecallGavin2020, said: “California is at a crossroad. People are frustrated at the destructive policies, divisive politics and manipulative tactics conducted by Gavin Newsom since the day he became governor. We cannot continue to allow one elected official in California to control each aspect of our lives without checks and balances,”
Mike Netter, co-proponent of RecallGavin2020, added: “Gavin Newsom will now be running against himself in the recall election. He created this recall because of his failed policies. Newsom has only one person to blame, and this is himself.”
Civil rights attorney Harmeet K. Dhillon of San Francisco, a member of the Republican National Committee, said in a statement: “Tested by the fire of a major crisis over the past year, Governor Newsom’s mettle turned out to be fool’s gold.”
She said Newsom failed to reopen schools, “destroyed countless businesses, driven hundreds of thousands of residents out of the state, lost us a congressional seat, exacerbated the homeless crisis, forced unconstitutional restrictions on places of worship leading to a half-dozen defeats at the Supreme Court, placed last in the country at vaccination distribution, mismanaged California into one of the worst wildfire seasons in memory, failed to prepare for the upcoming drought, overseen a dramatic increase in crime, and the list goes on and on.”
—Reuters contributed to this report

Despite attacks by Republican interests who demonized Gov. Newsom, and those they influenced, Governor Newsom has done an exceptionally good job during the worst health crisis to face California and America in 100 years. His leadership kept California from disaster, though the extremist followers of President Trump who refused to wear masks and now refuse to obtain vaccinations against COVID - "the COVID deniers" and such, caused California problems. You can lead a horse to water...Governor Newsom did his best and I appreciate him. The idea of a recall is simply politically motivated garbage.

ONLY because a judge gave the signature gathers more time because of covid and the signatures LIED! . This is going to cost the state many millions. . what a waste. . . . “Stop the Republican recall. It’s a power grab.”