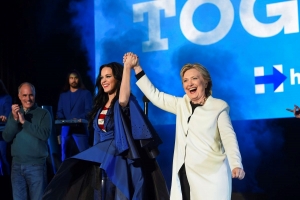 November 6, 2016 (Washington D.C.) - FBI director James Comey today announced that Hillary Clinton should not face any criminal charges with regard to emails recently found on a computer that belonged to former Congressman Anthony Weiner, who was married to top Clinton aide Huma Abedin.

A review of the emails provided no evidence of any mishandling of classified documents, Comey concludes.

The announcement may give Clinton a last minute bounce in key battleground states, where the latest polls show Clinton and Trump in a virtual dead heat.

“Based on our review, we have not changed our conclusion that we expressed in July with respect to Secretary Clinton,” Comey wrote in a letter to leaders of several Congressional committees, the New York Times reports.

Clinton campaign spokesman Brian Fallon tweeted, “We were always confident nothing would cause the July decision to be revisited,” Mr. Fallon said. “Now Director Comey has confirmed it.”

But Donald Trump denounced the decision, claiming the system is ”rigged” for Clinton.

The FBI discovered the trove of e-mails as part of its investigation into Weiner texting explicit messages to a minor on a computer his wife also used on occasion to send e-mails.

Comey has faced criticism for announcing the probe into the newly found emails just days before the presidential election.