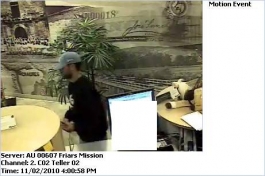 November 6, 2010 (San Diego’s East County) --The FBI and San Diego Police Department are seeking the public’s assistance to identify a man believed responsible for robbing three San Diego banks within the last month. The latest robbery was the Wells Fargo Bank, located at 5624 Mission Center Road on Tuesday, November 2. The same robber is also suspected of bank robberies in the College and Mission Gorge areas, according to special agent Darrell Foxworth with the FBI’s San Diego office.

On Tuesday, November 2 at approximately 4:10 p.m., a man robbed the Wells Fargo Bank, located at 5624 Mission Center Road, San Diego. At the time of the robbery, the robber approached the victim teller and made a verbal demand for cash and then placed a demand note on the counter for the teller to read. The demand note announced that “this is a robbery.” The teller complied with the robber’s demand and provided him with a sum of money. The robber took the money and walked out of the bank through the north doors and then walked in a northwest direction through the parking lot. No vehicle was observed.

Agents and detectives believe that this same individual is responsible for robbing the Wells Fargo Bank, located inside of the Ralphs grocery store at 6670 Montezuma Road, and the Bank of America, located at 6501 Mission Gorge Road, San Diego, California, on October 15, 2010. Following these robberies, the robber was observed leaving the area in a beige colored Mitsubishi sedan vehicle.

Witnesses describe the robber as a white or Hispanic male in his mid- to late-20s, approximately 5”9” to 6”2” tall with a thin build. In the most recent robbery, he wore a gray baseball cap with white “SD” logo, black long sleeve shirt with white letters and an “LRG” logo on front, gray pants, and white tennis shoes.

Such news brings back so many insecure thoughts. It was smart of the man to place the note instead of shouting 'it is a robbery.' From one way or he other these people are trying to rob everyone. The management of the bank and the police department has to nab this man. ID thefts are also becoming more rampant so before such thieves and robbers clean everything from our bank accounts we better become more cautious with our personal details as well. Casey Key