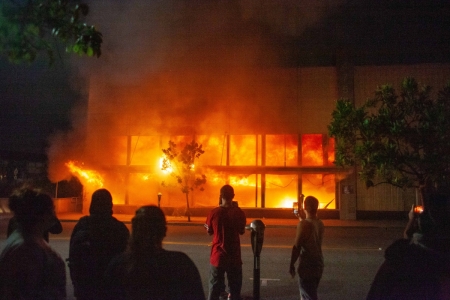 Witnesses are urged to send tips, photos, videos and surveillance footage to the FBI

June 4, 2020 (La Mesa) – The FBI is asking for the public’s help to identify and arrest violent instigators and those who committed crimes such as arson and looting in the wake of protests across the nation. This includes La Mesa, where violence erupted after Saturday’s protests including burning two banks, vehicles and a historic building as well as vandalism and looting at dozens of local businesses.

Many photos and videos showing crimes in progress during the chaos locally have been posted on social media sites, including some aired by local media organizations.  Many of those contain images that may provide evidence of one or multiple crimes, when compared to other sources of documentation such as surveillance footage taken of looters during the pillaging and burning of local stores and financial institutions.

“The FBI respects the rights of individuals to peacefully exercise their First Amendment rights. Our mission of protecting the American people and upholding the Constitution is dual and simultaneous, not contradictory,” a press released issued by the national FBI in Washington D.C. states.  “Accordingly, we are committed to apprehending and charging violent instigators who are exploiting legitimate, peaceful protests and engaging in violations of federal law.” 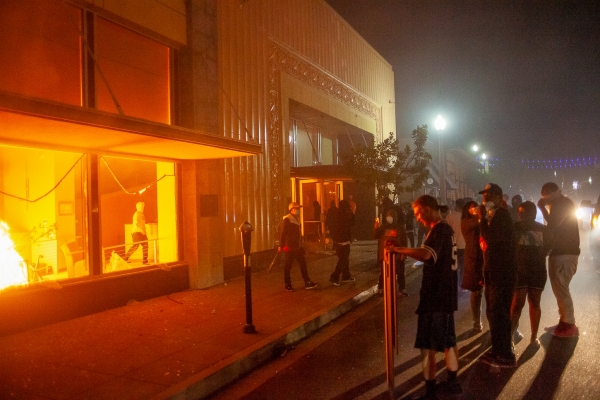 The press release continues, “The continued violence, potential threat to life, and destruction of property across the United States interferes with the rights and safety of First Amendment-protected peaceful demonstrators, as well as all other citizens.

To help us identify actors who are actively instigating violence in the wake of Mr. George Floyd’s death, the FBI is accepting tips and digital media depicting violent encounters surrounding the civil unrest that is happening throughout the country.”

Photo, right, by Jake Rose:  The individual carrying a baseball bat was earlier shown committing arson inside the Randall Lamb building in separate video livestreamed by another photographer.

If you witness or have witnessed unlawful violent actions, the FBI urges you to submit any information, photos, or videos that could be relevant to the case at fbi.gov/violence.