June 16, 2018 (Ramona) -- The Federal Bureau of Investigation (FBI) and Violent Crimes Task Force (VCTF) ask your help to identify a man believed responsible for robbing two banks in Ramona and a bank in Mira Mesa over the past week.

Dubbed the “Skinny Bandit”, he is described as a light-skinned black man in his mid 20s to 30s, between 6 ft. and 6 ft. 6 inches tall with a slender build, weighing 140 to 170 pounds.  He claimed to have a weapon and in one robbery, threatened to shoot the teller, but no weapon was seen.

Below are details on each of the three robberies:

On 06/09/2018, at approximately 10:44 a.m., the US Bank, located at 9400 Mira Mesa Boulevard, San Diego, California, was robbed by a lone male.  The robber entered the bank and passed a note to the teller demanding money.  The note also threatened to shoot the teller.  The teller complied with the robber’s demand and the robber departed the bank on foot with a sum of cash.  During the robbery, the male wore a dark grey jacket, dark colored long-sleeved shirt, long pants, a black baseball cap and sunglasses.  Immediately after departing the bank, the robber entered a nearby fast food restaurant where he changed clothes.   After the clothing change, surveillance cameras captured the robber wearing a white T-shirt and light grey shorts.  Furthermore, he was no longer wearing the black hat and sunglasses. 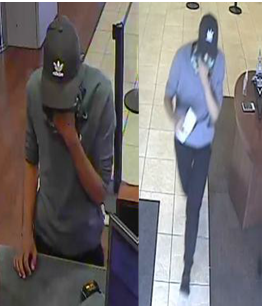 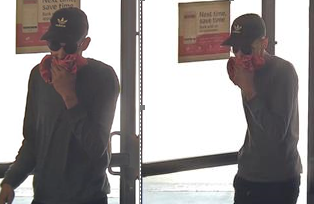 On 06/14/2018, at approximately 12:20 p.m., the Robber entered the Bank of America located at 1407 Main Street, Ramona, California and was made to wait behind other customers in line. The robber appeared to become nervous and subsequently fled the bank. During this attempted robbery, the robber wore a black baseball hat, dark colored long-sleeved shirt, and dark pants.  Again, the robber wore sunglasses and held a bandana over the lower half of his face.