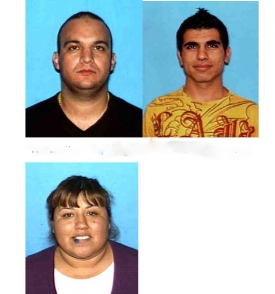 July 23, 2010 (San Diego) -- The FBI is seeking information that will lead to the arrest of the following individuals in relation to the"Operation Luz Verde" (green light) charges announced early today on federal racketeering charges related to a drug trafficking cartel:

The charges stem from a long-term investigation, entitled “Operation Luz Verde” (green light), conducted by the multi-agency San Diego Cross Border Violence Task Force (CBVTF), which was formulated to target those individuals involved in organized crime-related violent activities affecting both the United States and Mexico. Law enforcement personnel assigned to the CBVTF made extensive use of court-authorized wiretaps and other sophisticated investigative techniques to develop the body of evidence that led to the charges in this case.