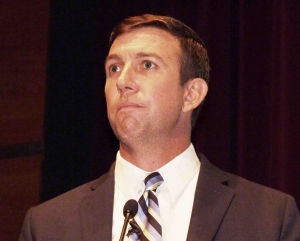 August 10, 2017 (San Diego) – Fraud, falsified documents and conspiracy to defraud a bank are among the crimes for which FBI investigators obtained a warrant and sought evidence during a February raid at offices of the treasurer for Congressman Duncan Hunter’s campaign, the San Diego Union-Tribune reports.

Hunter (R-Alpine) has been under investigation for allegedly spending tens of thousands of dollars of campaign funds improperly on personal expenses.  But the warrant indicates federal agents had expanded their investigation to look into whether Hunter also made false statements to First National Bank in order to obtain credit card refunds on video game purchases.

Computers and other records were reportedly seized from Election CFO, where Chris Marston, Hunter’s campaign treasurer, works.   Attorney Jason Torchinsky has said that Marston and another Election CFO employee, Brenda Hankins named on the search warrant, have “Cooperated fully with all government inquires” and that they have no reason to believe they are subjects of any investigation.

Large charges for video games on Hunter’s campaign credit card prompted the Union-Tribune to launch an in-depth investigation.  Hunter claimed the video games were mistakenly purchased on a card similar in appearance to his personal card. However, reporting by Union-Tribune reporter Morgan Cook revealed a pattern of questionable purchases charged to Hunter’s campaign, including a family vacation to Italy, expensive jewelry purchases, charges to an oral surgeon and his son’s school, among others.

Hunter has denied wrongdoing and his spokesman has attributed errors to sloppy bookkeeping.  But Hunter did later repay his campaign more than $60,000, securing a bank loan to do so.  He has not responded to inquiries from multiple news outlets including ECM for comments on the warrant disclosures.

The search warrant filings were first disclosed this morning by George Washington University researcher Seamus Hughes. But Politico reports, court personnel told a Politico reporter that  the records were not supposed to be made public but were released because of an error and have now been removed from the court’s public records system.

But Politico concludes, “The search warrant suggests the FBI’s investigation into Hunter has taken a serious turn. While the records do not include the arguments the FBI made to obtain the warrant, investigators must show probable cause to raid private property.”