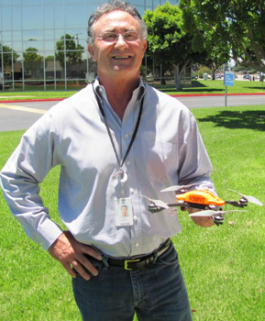 July 15, 2014 (San Diego’s East County)—San Diego Gas & Electric Company (SDG&E) is the first utility company in the nation to be approved by the Federal Aviation Administration (FAA) to test the use of small, unmanned drone aircraft for monitoring electric and gas lines.

The company announced that this will improve safety and response times, but the announcement is also drawing criticism for the lack of public input and potential environmental issues.

“The unmanned aircraft system provides us with another tool in our electric and gas operations tool chest,” says Dave Geier, SDG&E’s vice president of electric transmission and system engineering. “This versatile technology would allow us to improve our response to emergency situations such as fires, as well as complete aerial inspections in remote areas that are otherwise difficult to access, and locate the cause of power outages faster.”

The drones are small – weighing less than a pound and measuring just 16 inches.  They can reach places that helicopters can’t access to inspect infrastructure and transmit live images. If testing proves effective, SDG&E may seek FAA approval to use the devices more broadly on its field inspections of over 26,000 miles of transmission and distribution lines for safety and compliance purposes, as well as to make sure that the grid is running smoothly and effectively, the company states. 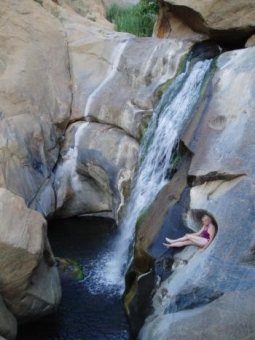 But Cindy Buxton, Forest committee Chair of the San Diego Sierra Club, told East County Magazine that environmentalists feel “broadsided”  by the FAA opening up the skies for what she calls a “free for all” with no prior notification to the public to provide input.

Buxton admits that she herself has dreamed of obtaining a drone to fly over local wilderness and waterfalls to photograph the beauty of these remote areas, but opted not to after learning that early models caught fire and costs rose on later versions of quad copter drones.

She asks how the FAA can have jurisdiction for a foreign object to travel a hundred feet or less off the ground and notes that a power line in Cedar Gorge is too close to nesting eagles. Drones in the forest may also interrupt scenic character and expectations of privacy in the forest, and are thus not consistent with the solitude in thee areas.  Buxton believes that a full Environmental Impact Study should have been required.

Without guidelines, eyewitness accounts and oversight, she suggests, data could be manipulated, marginalized or manufactured, Buxton fears.  The long-time defender of local wilderness concludes, “The ongoing sense of entitlement by a publicly traded corporation over the appropriate U.S. government agency may be the most infuriating component of all.”