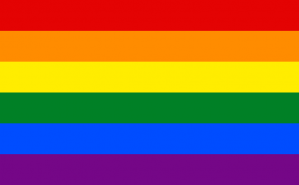 "Gay flag" by Guanaco and subsequent editors.  Uploaded to Wikipedia by Sarang
December 22, 2015 - On Monday, the Food and Drug Administration lightened air-tight restrictions on a 30-year ban on blood donations from gay and bisexual men.
Gay and bisexual men can now donate blood a year after their last sexual intercourse with another man.  Before the change, gay and bisexual men could not donate blood if they had had sex with any men.
The FDA said in a press release that the reversal is based on an examination that a ban is not necessary to prevent transmissions of HIV.
The ban had previously been in place since 1983 at the beginning of the AIDS fear in America.
The United States joins the United Kingdom, Australia and New Zealand in enforcement of the one year rule.
While some LGBT groups applaud the decision, some are not happy; they still say that the lightened restriction is discriminatory.
"The United States government has to stop reacting to HIV like it is the early 1980s," said Kelsey Louie, CEO for Gay Men's Health Crisis, the nation's largest provider of HIV and AIDS treatment, told CNN. "It is time for the FDA to implement a policy that is truly based on science, not blanket bans on certain groups of people."
The Human Rights Campaign said to CNN that the switch is a "step in the right direction," but it "still falls short of a fully acceptable solution because it continues to stigmatize gay and bisexual men."
In 2006, the organization formerly known as the American Association of Blood Banks, the Red Cross and America's Blood Centers claimed that the ban was "medically and scientifically unwarranted" and urged the FDA to modify the policy.