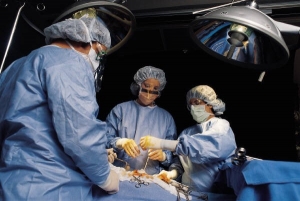 November 24, 2014 (Washington D.C.) – The U.S. Food and Drug Administration warns that most women should not have hysterectomies or removal of fibroids using a morcellator device, because it can spread cancer.

A morcellator pulverizes fibroids to allow a surgeon to remove them through a small incision in the abdomen.  But if any of the fibroids are cancerous, pulverizing them spreads cancer cells throughout the abdomen.  At least two dozen women have had treatable conditions become life-threatening conditions due to use of the morcellator, according to the FDA.

It’s impossible to know if uterine fibroids are cancerous until after a surgical procedure is done and a biopsy is completed.

Johnson & Johnson, a major manufacturer of morcellators, pulled them off the market in April and many major hospitals have stopped using them.

One in 350 women undergoing a hysterectomy or myomectomy is found to have previously unsuspected uterine sarcoma cancer.

There are other surgical treatment options available for women with symptomatic uterine fibroids, such as traditional surgical hysterectomy (performed either vaginally or abdominally) and myomectomy, laparoscopic hysterectomy and myomectomy without morcellation, and laparotomy using a smaller incision (minilaparotomy).

The FDA stopped short of banning the devices, which can help prevent scar tissue in younger women that would otherwise reduce their chances of becoming pregnant.  It also reduces recovery time from surgery, due to the smaller incision required with morcellation.

Despite dangers from the device, the American College of Obstetricians and Gynecologists praised the FDA's decision to stop short of a ban, stating "We continue to believe that power morcellation has a role in gynecologic surgery."