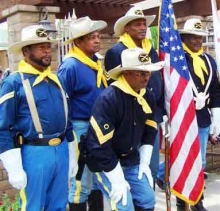 January 26, 2012 (Lemon Grove)--The sound of drumbeats, horses' hooves and rifle fire, and the snap of flying colors amid the wide open spaces of the American West are yours on Feb. 2 at 7 p.m.   Descendants of the 9th and 10th Cavalry Regiments of the famous African American Buffalo Soldiers will relive the glory days, when they were the advance guard in the nation's Western expansion.

African American soldiers, many of them former slaves, were sent to serve in harsh, desolate territory during the Civil War period. Determined to prove their worth as soldiers and as men, their rate of desertion and court martial was almost non existent as they defended much of the land west of the Mississippi while railroads, stage coach routes, telegraph lines, homesteads and towns were developed.

The soldiers also sought to build new lives, gain education and even start towns on the frontier. Regimental descendants stayed together and went on to serve with honor and distinction in the Spanish American, Philippine American, Mexican Expedition, and World Wars I and II.

The Lemon Grove Historical Society is proud to continue its free "History Alive" lecture series during Black History Month with members of the San Diego Chapter of the National Association of Buffalo Soldiers in full regalia. Carl Wright, Robert Joyce, John Green, Ken Wilkins and Rachel Hilliard will present a short PowerPoint history, a discussion and a skit by Hilliard about the role of female soldiers. Both Joyce and Green are direct descendants of Buffalo Soldiers in the 9th and 10th Cavalry Regiments.

Black History Month was launched in 1926 by the Association for the Study of African American Life and History and linked to the February birthdays of antislavery leader Frederick Douglass and the emancipation president Abraham Lincoln. The Historical Society joins with institutions and organizations nationwide in promoting the 2012 theme, "Black History is Everyone's History."

"History Alive" is suitable for ages 13 and over. The event takes place at the H. Lee House Cultural Center, 3205 Olive Street in Lemon Grove.  The presentation will be followed by questions and answers and refreshments. Donations for the latter are greatly appreciated. For more information, call 619-460-4353.