Reprinted with permission from: http://www.sandiegolovesgreen.com/articles/the-federal-advisory-committee-minces-no-words/

January 16, 2013 (San Diego)--Justin Gillis, of the New York Times Green Blog, titles his introduction to the recently released Federal Advisory Committee Draft Climate Assessment Report” as “An Alarm in the offing on Climate Change.” Personally, I find it reminiscent of a modern day Book of Revelation - only many of the predicted calamities are aimed directly at me and mine. The message is not new. Some scientists have been warning us about Climate change for decades. What is new, is that this is a Government report which, Gilllis writes, “minces no words”. He adds a note of caution, that “it is a draft, so we don’t know what final language will make it into the report.”

I have not read the entire 1193 page document, and probably won’t, but instead focused on the specific chapters relating to two key questions: What do they foresee in the near future?, if the World keeps going on as it is, and is there anything we can do about it?

According to the cover letter, “Long-term, independent records from weather stations, satellites, ocean buoys, tide gauges, and many other data sources all confirm the fact that our nation, like the rest of the world, is warming, precipitation patterns are changing, sea level is rising, and some types of extreme weather events are increasing. These and other observed climatic changes are having wide-ranging impacts in every region of our country and most sectors of our economy. Some of these changes can be beneficial, such as longer growing seasons in many regions and a longer shipping season on the Great Lakes. But many more have already proven to be detrimental, largely because society and its infrastructure were designed for the climate of the past, not for the  rapidly changing climate of the present or the future.”

The crux of the problem is that, “The current U.S. share of global CO2 emissions is about 20%. At the current rate of emissions growth, the world is on a track to exceed the 44 billion ton level within a decade. More aggressive greenhouse concentration targets, such as those associated with a frequently-discussed limit of a 2ºC (3.6ºF) temperature increase above pre-industrial levels would require an even more dramatic reduction in global emissions.”

Global sea levels have risen about 8 inches, since 1880, and are expected to rise another 1-4 feet by 2100. “Flooding and erosion in coastal areas is already occurring and is damaging some areas of the California coast during storms and extreme high tides. Sea level rise is projected to increase, resulting in major damage as wind-driven waves ride upon higher seas and reach further inland.” The coastal highway, 12 bridges, and parts of several major cities are at risk. This salt water incursion also threatens to contaminate the water supply.

Even without Climate Change, California is expected to cost $4.6 billion annually over the next 2-10 years. Add the impact of Climate Change and important decisions will have to be made. For example, how much water should be reserved for San Diego, when it means sacrificing the agricultural needs of the Imperial Valley?

California’s farms will need that water as temperatures rise. “Drought and extreme weather affects the market value of fruit and vegetables more than other crops, because they have high water content and because sales depend on good visual appearance. The combination of a longer frost-free season, less frequent cold snaps, and more frequent heat waves accelerates crop ripening and maturity, reduces yields of corn, tree fruit, and wine grapes, stresses livestock, and increases agricultural water consumption. This combination of climate changes is projected to continue and intensify, possibly requiring a northward shift in crop production, displacing existing growers ...” 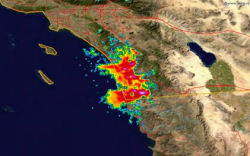 The number of fires will also increase. “Numerous fire models project more wildfire as climate change continues. Models project a doubling of 23 burned area in the southern Rockies, and up to 74% more fires in 24 California.”

The document does point to a possible way out of this predicament. There are references to “a variety of policies and means at federal, state, and local levels are currently in place that lower emissions”, the most stellar example being California. However, “Over recent decades, the U.S. economy has emitted less carbon dioxide per dollar of gross domestic product (GDP) for many reasons. However, U.S. population and economic growth have outweighed these trends, and in the absence of additional public policies greenhouse gas emissions are expected to continue to rise.” There is a clearer reference to the lack of policy on page 955, “ ... Even absent a comprehensive national greenhouse gas policy  ...”

It would seem America’s best hopes of emerging from these calamities with minimal damage rest with the same people who have brought the US to the edge of the fiscal cliff.