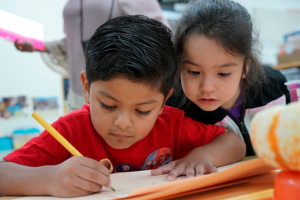 December 10, 2019 (San Diego) -- In California, 1.3 million children younger than age five may lose out on essential services because of a hostile immigration climate, according to a new report.

Researchers from two children's advocacy groups found that the Trump administration's anti-immigrant policies and heightened law enforcement have had major impacts on children up to age five.

"That's been the most heart-wrenching thing for us, is seeing their struggle and the fear that has been embedded in them," she states.

Lopez says many families are refusing all forms of public assistance, even for their American citizen children, mistakenly believing that this would be held against them when applying for residency.

President Donald Trump says his policies are designed to reinforce the rule of law and save taxpayer dollars.

Mayra Alvarez, a report coauthor and president of The Children's Partnership, an advocacy organization focused on children's health equity, says many children suffer, terrified that their parents won't be there when they get home from school.

"The kids are becoming more aggressive," she points out. "There's also greater separation anxiety. Social withdrawal, being more stressed out as a result of this environment."

Patricia Lozano, another coauthor and executive director of Early Edge California, an advocacy organization focused on early learning, encourages state policymakers to pass a law that declares preschools and day care centers off limits to immigration officers - something already in place at K-12 schools in the state.

"Early childhood programs should be safe places for families, and the providers and teachers need the support to provide the right resources to face this hostile environment," she stresses.

California demonstrated its commitment to early childhood programs by allocating funds in the new state budget to train home visitors from the Cal Works program on ways to blunt the impact of federal immigration policies and help families connect to needed services.