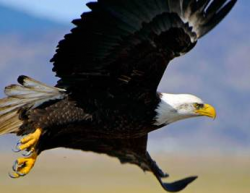 February 21, 2013 (San Diego’s East County) – Environmental groups are reacting with shock and outrage to  a U.S. Department of Interior rule change that would allow private wind energy corporations to apply for unprecedented 30-year permits to kill  our nation’s national symbol, the Bald Eagle, as well as Golden Eagles.

“Outrageous,” Terry Weiner with the Desert Protective Council in San Diego said of the proposal.  The DPC has joined a call mounted by the nonprofit American Bird Conservancy asking  that further consideration of the revise rule be suspended until Sally Jewel, President Barack Obama’s nominee to replace Ken Salazar as Secretary of  the Interior Department ,has an opportunity to fully review the proposal and evaluate its long term impacts.

“The public places a high value on both Bald and Golden Eagles, two species that have inspired awe, pride and patriotism in America’s citizens for generations,”  wrote Darin Schroeder, ABC’s Vice President of Conservation Advocacy.

The Altamont wind farm in Northern California alone has killed thousands of eagles.  Many other wind projects have also killed eagles, which often die a slow and painful death after losing wings or suffering fatal wounds.

In San Diego, the eagle population has declined 50% in recent years yet several new wind energy projects are proposed in eagle habitat, including McCain Valley, a formerly federally protected area on U.S.  Bureau of Land Management property.  There are only about 46 nesting pairs of Golden Eagles left in San Diego County and a handful of Bal Eagle pairs.

Yet Dave Bittner with the Wildlife Research Institute, which published a report lamenting the eagle decline, is also on the payroll of the wind industry to study the eagle areas in the path of local wind farms--studies with findings enabling wind turbines to be built. Curiously, his report on eagle declines blames the problem mainly on new hiking trails naer nests and fails to mention wind projects as posing any threat at all to local eagle populations.

Schroeder called the new, weaker rule drafted at the request of the wind industry  a curious reversal of a U.S. Fish and Wildfife Service decision made in 2009.  Schroeder charges that the rul was drafted following invitation-only meetings  without consultation from stakeholders such as Indian tribes, conservation and scientific groups, or other industries.

Wind developers are already allowed to apply to FWS for a permit to unintentionally kill limited numbers of eagles if they agree to some form of mitigation, but such permits are limited to five years to assess impacts. The new rule not only would extend that to 30 years, but as Schroeder notes, “By eliminating the renewal process, FWS also eliminates public oversight.”

Weiner confirmed that meetings between wind industry executives, federal agencies and some conservation groups took place but “they have not been open to the public.”  The DPC received notes from one of the meetings: http://dpcinc.org//images/uploads/EagleMtgNotes_11-29-12.pdf

The local conservation group found those notes revealed several “troubling issues” and further, concludes that also the U.S. FWS has a mission to conserve, protect and enhance wildlife, plants and habitat for the beneft of the American people, “the purpose of the meeting, as stated by a senior official of the USFWS, was to enable wind energy projects to get permitted.”

Further, discussions did not even reference avoiding or minimizing eagle takes and further, that the meetings may have violated the Federal Advisory Committee Act which requires that federal advisory committees have balance membership and notice published in the Federal Registrar.  The closed-door meeting gave industry input after a public comment period closed in April, a move the DPC calls “highly discriminatory.”

The take permit controversy arises amid revelations that the Merlin Avian Detection System touted by the wind industry as a means of reducing bird kills is ineffective at preventing eagle deaths.  Pattern Energy claimed during its wooing of public official support for its Ocotillo Express Wind Facility that the system would enable turbines to be shut down if a large raptor such as an eagle approached.  But a video published last week by ECM showed a large vulture flying through whirling blades last week at Ocotillo, indicating the system failed to detect the bird or shut down turbines.

That doesn’t surprise Diana Palmer, who investigated the same system used in Ocotillo also in operation at the NextErea North Sky River project.  “It seems to me this system must not work or they wouldn’t have had a dead Golden Eagle at the No rth Sky River project this past January, “ she told ECM.  She forwarded the product’s technical data sheet, which  states the system detects bird movements in “near real time” and observed, “You would need actual real-time detection, in my opinion.”

Conservation groups are like labor unions. Their leaders are entrusted to represent their members interests but it does not happen. They are selling out at the top like crooked union bosses. These groups may also be bound by gag orders for money they have accepted from the industry or mitigation funds from wind projects. This is what happens when people let representatives speak for them.

Think about all the information I have provided about the wind industry over the last several years. It would all be in a trash bin if I entrusted these people to speak for me. There is also something else none of the groups are speaking about, whooping cranes. What is happening to this iconic species just reeks of gag order restrictions.

This population is in a very grave situation because of the wind industry. From the latest numbers given it is very bad news. The 2012-2013 whooping crane survey was quietly released last week.  Based on the growth rate prior to 2006,  this yearscount of central flyway flock, should now have a solid 400 whooping cranes in it plus or minus 1% .  With the new "Elmer Fudd" count methodology used by the USFWS they are claiming that with a 95% confidence interval (CI) there could be anywhere from 178 to 362 left. It's a disgrace and a cover-up. The truth about the whooping cranes probably lies in the 5% of uncertainty and that there are now fewer than 178 left.  This is crazy. Almost anybody reasonable could come up with a better estimate in a few hours with a small plane.  Last year the spread was 192-316 and next year will probably read 150-425. It will continue like that until they are gone.  Heck, I don't even need a plane to come up with a 100% percent confidence interval of 1-362 or a 100 percent confidence interval that there are not 362. The scary thing about all this is that there are idiots and corrupt individuals out there that will grab on to the 362 number and sell it..

This species is quickly disappearing and the industry is changing laws as fast as possible so they can start killing them "legally" with permits. The industry knows they need these permits because soon they will not be able to keep hiding it.

And again, where are the Sierra Club, the Audubon Society and other animal protection environmentalist/conservation groups?

Nowhere to be seen. Utterly silent.

What could be more disappointing, more disillusioning? We expect lies and cynical duplicity from politicians. It's a little harder to take groups like these.

I urge you to voice concerns to these groups about their failure to speak out about the devastating impacts of wind energy on wildlife. Local chapters are being muzzled on this issue by their national organizations.

Money talks.  If I still had a membership, i'd be threatening to cancel it or maybe mailing back a shredded membership card with a demand for a refund, unless they take a stand.

In no way do I believe that there are 46 nesting pairs of eagles in San Diego County.  I have looked over the Wildlife Institute Site along with their golden eagle alert. Everyone needs to keep in mind that there is a tremendous difference between calling a yellow or green circle on a map an active golden eagle territory and actually having an occupied productive nesting territory.  The WRI and people of San Diego County need to verify EXACTLY how many of these occupied nesting territories there really are so planning departments do not in advertently slaughter (wind projects) off the few eagles left in the region.   I would imagine the WRI would be willing to help provide an accurate golden eagle count along with  nest site GPS coordinates for the people of San Diego County.   This way the most important component of any golden eagle population can be properly managed.

I will also share this bit of information that will get readers scratching their heads. I have made numerous studies on raptors over of the years. Their territories are rarely circular in shape.

We should not enable the wind industry.   Instead, we should hold them accountable on ALL issues, ESPECIALLY bird "take" (kill) permits, same as everybody else.   Otherwise, they're just getting a "Free Pass".

I don't understand why Mr. Bittner thinks hiking trails are more of a threat than wind turbines to Bald and Golden Eagles - ?

We were hiking cross country when we discovered and photographed a pair of Golden Eagles in McCain Valley, although we also use roads and trails.

Maybe things are finally bad enough that the under informed voter will stop electing these left wing "progressive" politicians? They are doing exactly what they said they would do. Alternative energy at any cost. And yet people are surprised when they do it.