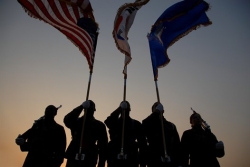 November 21, 2013 (Washington D.C.) The U.S.  Department of Homeland Security (DHS) has issued a memo aimed at halting the automatic deportation of “spouses, children and parents of active-duty military members, reservists who may be called up as part of the 'Ready Force.'"  Family members of U.S. troops can now apply for parole, allowing them to stay in the U.S. while Congress continues delaying action on comprehensive immigration reform.

DHS argued that the constant threat of deportation put an unnecessary "stress and anxiety" on those who signed up to serve their country through military service. The memo said parole would be granted on a case-by-case basis. The family members would be vetted for such things as criminal convictions before being allowed to remain.

“Generally, parole in place is to be granted only sparingly. The fact that the individual is a spouse, child, or parent of an active duty member of the U.S. Armed Forces, an individual in the Selected Reserve of the Ready Reserve, however, ordinarily weighs heavily in favor of parole in place,” the memo states

The League of United Latin American Citizens and veterans groups have waged a postcard campaign focused on families of military and veterans, asking members of Congress to “honor those who fought for our country by helping those who they fight for.”

Brent Wilkes, executive director of the League of United Latin American Citizens, praised the action but said the ultimate solution is for Congress to enact immigration reforms.

“We salute the White House and the department, but we recognize this is not a permanent solution,” Wilkes said. But he added that protections to prevent family members of U.S. military personnel from deportation are merely temporary solutions. “The next president could do away with the policy,” he concluded.