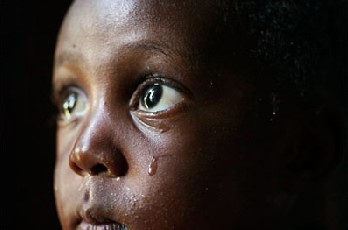 Photo: Child in Africa, where famine threatens millions of children with starvation, the U.N. announced this week.  Trump’s order, blocked by a judge, barred refugees from entering the U.S, including drought-stricken nations

March 16, 2017 (San Diego) – A federal judge in Hawaii has blocked implementation of President Donald Trump’s revised travel ban, just hours before it was scheduled to take effect. In a scathing 43-page ruling, U.S.  District Judge Derrick K. Watson wrote that there is a strong likelihood that the case, filed by the State of Hawaii, would be successful in proving that the executive order violates the U.S. Constitution by discriminating based on religion. Read the ruling.

The revised travel ban included several changes from an earlier ban that was blocked by a 3-judge panel on the 9th Circuit Court of Appeals. Both orders ban all refugees from entering the U.S. for 120 days. The new order exempts Iraq, but still bans entry from 6 countries with predominantly Muslim populations (Iran, Libya, Somalia, Syria, Sudan, and Yemen).  Syrians are no longer banned indefinitely under the new order. The revised travel ban also eliminates the restrictions on green card and visa holders.

The ruling means that for now, refugees from all countries and immigrants from the 6 Muslim nations cannot be banned from entering the U.S., unless normal vetting procedures show cause on an individual basis.

The lawsuit challenging the new ban was filed by the state of Hawaii. The judge agreed with the state’s assertions that the ban would harm the ability of businesses and universities in Hawaii to recruit top talent and hurt tourism. The also cited the concerns of Ismail Elshikh, imam of the Muslim Association of Hawaii, a citizen who feared that his mother-in-law, a Syrian who has applied for a visa, could be banned from entering the U.S. Lawyer Colleen Roh Sinzdak argued that Muslims such as Elshikh would face “higher hurdles to see family because of religious faith,” the Washington Post reports.

Jeffrey Wall, acting U.S. Solicitor General, argued that there would be no irreparable harm caused by the ban, a claim that seems far-fetched given that refugees would be denied safe passage out of countries where war and starvation are killing people on a daily basis. The United Nations this week warned that 20 million people are likely to die of starvation in four nations without immediate help; three of those are on the list of nations from which Trump seeks to ban refugees.

Trump criticized the judge’s decision to block his order as “unprecedented judicial overreach” during a rally in Nashville.  He vowed to take his case to the U.S. Supreme Court, 10 News reports.

Options for Trump include waiting for the Hawaii court to hear the full case, or appealing to the 9th Circuit, where a 3-judge panel already blocked the earlier travel ban on constitutional grounds.

Judge Watson cited Trump’s own words and statements by his administration’s advisors as evidence that he intended to discrimination against Muslims.

The judge wrote, “For instance, there is nothing `veiled’ about this press release: `Donald J. Trump is calling for a total and complete shutdown of Muslims entering the United States.” He further cited a TV interview in which Rudolph Giuliani stated that Trump called him up and asked him to find a legal way to order a “Muslim ban.”

Justin Cox, an attorney with the National Immigration Law Center, called the ruling a “victory” but noted that while the judge’s order blocked Theban on refugees and immigrants from Muslim countries, the court did not block a lesser-known provision that requires Homeland Security and the Attorney General to publicize crimes committed by foreign nationals.  He called that provision a “shaming device” designed to perpetuate stereotypes.

Lets see , the judge was appointed by obama, obama is in Hawaii at the moment. President Trump's action is legal.

Mr Bacon, thank you for pointing out something that has long mystified me. Our Constitutional system is not working as designed.

that foreigners are subject to the US Constitution! Go figure. So it's anything they can do to be anti-Trump. Lawyers are not always a joke, when it comes to deciding about a President's security actions.
Isn't it odd that the fifteen-years of Bush/Obama killing, injuring, displacing and torturing Muslims in various countries without war declarations has been acceptable to the courts, but a temporary Trump suspension of US travel for Muslim war survivors from those countries is unconstitutional. "War and starvation are killing people on a daily basis" so the answer is to be gracious and allow them to leave if they manage to live through it? . . .Stop the damn wars. . . .In other news: WAR IS BOOMING: Lockheed Martin quadruples factory production of laser-guided bombs and Hellfire missiles in run-up to global warfare .