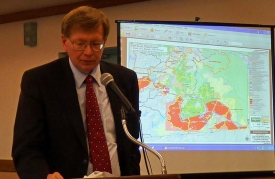 Plaintiffs’ attorney Stephen Volker represented the Protect Our Communities Foundation, Backcountry Against Dumps and the East County Community Action Coalition. Volker argued that the BLM’s environmental review was inadequate and that its approval of Powerlink will increase the number of acres of protected lands open to development from 51 acres to 41,000 acres in McCain Valley, a scenic federally owned wilderness area.

Volker further contended that the agency failed to protect or minimize damage to scenic, environmental and cultural resources by exempting Sunrise Powerlink from its Resource Management Plan. Studies of cultural and biological resources were not even conducted until after the BLM approved of Powerlink construction—even though the route had been changed from the original course through Anza-Borrego to a new Southern Route through East County and the Cleveland National Forest.

“So here we have an agency purporting to lock the barn door after the horse has run off,” he said.

He said that the agency violated the National Environmental Policy Act (NEPA) by hastily approving the Powerlink right-of-way “despite no intelligible analysis of the impacts or location of the Southern Route.” Plaintiffs contend that the BLM failed to assess impacts on species such as Peninsular Bighorn Sheep, Least Bell Vireo and the Checkerspot Butterfly. He further contended that many area residents never had an opportunity for input after the route change and that the BLM report did not enable readers of its report to ascertain risks of fire impacts.

An attorney for the BLM told the judge that “the agency’s exercise of judgment is entitled to deference.” Attorneys for the defendants contended that reviews have been adequate and plaintiffs had opportunity for input.

Defendant’s attorneys also disputed plaintiff’s request that the court weigh cumulative impacts of multiple future energy projects proposed in the Mc Cain Valley, such as the Tule wind farm, arguing that such projects are “independent albeit related” to the Powerlink.

But Volker countered, “Here we have a transmission line to enable these energy resource projects—indeed this is the very purpose of the line.” He further noted that one CPUC commissioner had said rooftop solar would be more environmentally sensitive for meeting our region’s power needs.

He was sharply critical of the BLM’s actions, likening the agency’s approval of the Powerlink project to “being prepared to chop down our creator’s cathedral for firewood.”

Janice Schneider of Latham and Watkins LLP represented SDG&E at the hearing. Schneider called NEPA environmental reviews “comprehensive and thorough” and contended that “the public clearly knew what was going on.” She said the Southern route, which SDG&E once called infeasible, is actually 30 miles shorter and “has fewer significant impacts.”

Claims by SDG&E were disputed afterwards by numerous audience members present. “I live right next to the project in Moreno and I never received a notice,” said Linda Nickesson in an interview after the hearing. “None of us got notices, only one house got a notice…They’re putting 20 story towers on the ridge behind me.” She also cited fears over fires and added, “People who live next to Cleveland National Forest, they’re already paying $4,000 a year now for fire insurance.” Many residents in Lakeside’s El Monte Valley, which abuts federal lands, have similarly stated that they never learned that Powerlink’s route had been changed to go through their communities until after approvals had been granted.

Judge Roger Benitez peppered attorneys on both sides with questions on technical points and focused closely on jurisdictional issues. Each side cited judicial decisions to bolsters its claims.

At one point, Judge Benitez commented, “I wonder if you can ever get consensus on any project.”

At the close of the hearing, the judge observed, “You know I’m the fourth judge in this case, and you know the record on this case is considerable.” He told those present that he realizes “all of you are invested in this” and pledged to “do my best in analyzing the issues.” But he noted that since he will be presiding over a trial starting up in an unrelated case, he could not predict how long a decision in this case will take.

Asked for SDG&E’s reaction to the hearing, Jennifer Ramp, spokesperson for SDG&E replied via email, “We expect Judge Benitez to issue his ruling in the near future and we’re hopeful and confident that he will uphold the Bureau of Land Management’s environmental review of, and decision to approve, the Sunrise Powerlink.”

Speaking with ECM outside the courtroom after the hearing, plaintiff’s attorney Volker said that “fire issues are a huge part of the case” in the written records submitted but that he was not able to present those arguments in court. “That was in the next tier of issues I’d have brought up if I’d been allowed time.” Instead, he said he needed to use his time to respond to technical questions posed by the judge.

“We believe the record will vindicate our arguments in that this project exposes people to unacceptable fire risks, both because Powerlink is a source of ignition and because it interferes with firefighting ability,” he concluded, noting that the line would restrict both dropping of air retardant and fighting fires on the ground within 1,000 feet of powerlines. An EIR report calls Powerlink a “severe and unmitigatable fire hazard.” Volker said fires are most effectively fought on ridgelines due to winds, adding, “If Powerlink is on the ridgetop, you lose the opportunity to stop a fire before it gains momentum and burns out of control, as we’ve seen happen before.”

He concluded, “That is absolutely the most terrifying aspect of this case.”