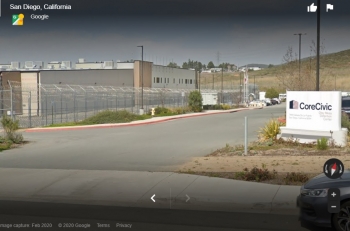 By Miriam Raftery
Photo (Google): CoreCivic's Otay Mesa Detention Center
May 5, 2020 (San Diego) – Judge Dana Sabraw issued an order on April 30 directing the federal government to release more than 50 medically vulnerable individuals who are in U.S. Immigration and Customs Enforcement (ICE) custody at the Otay Mesa Detention Center. According to the ICE website, at least 105 detainees at the facility have tested positive for COVID-19.
Judge Sabraw wrote in his decision, “The Court HEREBY DECLARES that current conditions of confinement for Otay Mesa Medically Vulnerable subclass members held at the Otay Mesa Detention Center are unconstitutional under the Fifth Amendment because the conditions of their confinement place subclass members at substantial risk of serious illness or death.”
Concerns over COVID-19 at the facility have prompted protests by immigration advocates and hunger strikes by detainees, with some advocates describing the facility as a death trap due to the rapid spread of the deadly virus.
The release order is a result of a lawsuit filed last week by American Civil Liberties Union Foundation of San Diego & Imperial Counties (ACLUF-SDIC) in U.S. District Court demanding a drastic reduction in the number of detainees at the Otay Mesa Detention Center and the Imperial Regional Detention Facility to slow the spread of COVID-19 and save lives. 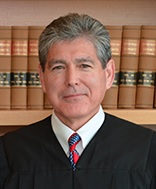 Right: Judge Dana Sabraw
The lawsuit, filed on April 21, included a request for an emergency temporary restraining order calling for immediate release from Otay Mesa of older detainees and people with underlying medical conditions that place them at heightened risk of serious illness or death due to COVID-19. The judge granted the request, ordering the release of medically vulnerable people with underlying conditions and those age 60 and over.
In an April 28 hearing on the ACLUF-SDIC lawsuit, attorneys for CoreCivic, the company that runs the Otay Mesa facility, told the court there were only eight individuals in ICE custody at higher risk for severe illness due to the virus. One day later, CoreCivic filed a supplement with the court saying they “acquired new information” from ICE that “51-69 ICE detainees” are at “higher risk for severe illness due to COVID-19.”
“Our primary and most pressing concern is the health and safety of people in harm’s way at Otay Mesa, where the rapidly escalating outbreak of COVID-19 threatens the health and safety of confined people and staff. We are pleased the court has ordered release, recognizing it is the only option to protect medically vulnerable people during this crisis,” said Monika Langarica, immigrants’ rights staff attorney with the ACLUF-SDIC.
She adds, “We will vigilantly monitor compliance with this order because it is clear that, left to their own devices, ICE and CoreCivic cannot be trusted to care for people in their custody. And we will continue fighting on behalf of all vulnerable people in jails, prisons and detention centers during this global pandemic.”
A copy of the judge’s order is here: https://www.aclusandiego.org/wp-content/uploads/2020/04/2020-04-30-38-OR...