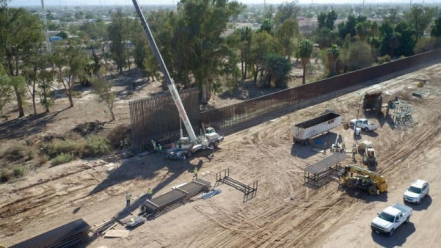 August 28, 2020 (Campo) - A federal judge handed the Trump administration a victory Thursday by refusing to halt construction of a section of border wall near Campo.

Judge Anthony Battaglia heard arguments via teleconference for and against a temporary restraining order sought by the La Posta Band of Diegueno Mission Indians.

In the end, he rejected a bid for a preliminary injunction as well — canceling a scheduled Sept. 17 motion hearing. (“Waiting two weeks to do what can be done today doesn’t make sense,” Battaglia said, noting insufficient time for discovery and filing of briefs.)

Among the targets of the civil suit are President Trump, Homeland Security Secretary Chad Wolf and Defense Secretary Mark Esper.

The issue boiled down to: Is the project zone a drug-smuggling area that requires an immediate wall or a sacred burial site that federal law protects?

“If the remains are pulverized, there’s no way to bring them back,” said Simon W. Gertler, an attorney for the tribe. He added that money meant for the wall might be better spent on other means of drug interdiction, so “no irreparable harm to border security.”

But Battaglia — nominated to his post by President Obama in 2010 — agreed with the government. For now.

“I take the view that the Supreme Court has spoken about the [Pentagon shift of money] issue and has set the law down,” he said. “It’s a finding that is substance over form, clearly…. I think the Supreme Court doesn’t always give us insight, but [in Trump v. Sierra Club] they did. And when they speak, I think we’re obligated to listen.”

On other issues, the tribe failed to meet the burden of proof that it likely would prevail at trial, said the 71-year-old judge.

As to which side faced the most harm — the so-called balance of interests — “I’m not persuaded that they weigh in favor of the plaintiffs.”

In fact, Battaglia accepted government assertions that halting work now would cause severe funding problems down the line. He also cited “the huge influx of drugs that we’re facing as a country — evidenced by looking at my calendars on Mondays.”

He said the La Posta band “doesn’t go beyond speculation for the most part” on the existence of burial grounds where wall work is being done.

The opposing male-female lawyer teams (“Two-on-two, sounds like a short-handed basketball game,” he said at the outset) fought over whether the tribe received adequate chances to consult about the projects.

“But from what I hear, those opportunities have been made available,” the judge said, taking the government’s side.

“The Secretary of Defense concluded that DHS identified each project location as a drug-smuggling corridor…. The United States Border Patrol collectively had over 480 separate drug-related events in fiscal year 2019 between border crossings in the San Diego an El Centro border patrol sectors where the barriers will be built,” said the government in a recent filing. “These encounters resulted in the seizure of approximately 3,400 pounds of marijuana, 1,300 pounds of cocaine, 400 pounds of heroin, 6,500 pounds of methamphetamine, and 107 pounds of fentanyl.”

Since then, the government says, “courts have consistently refused requests to enjoin construction projects at the southern border authorized by the Department of Defense. … Undeterred by the weight of these precedents, Plaintiffs seek a temporary restraining order and preliminary injunction ‘to immediately cease all construction activity’ of approximately 20 miles of new border barrier construction — 14 miles of which merely replaces existing barriers.”

But the La Posta band — one of 12 bands of Kumeyaay people — noted in its own response filings that the Sierra case isn’t settled law, arguing: “The Supreme Court’s stay order does not erase the binding effect of the 9th Circuit’s decision.”

Moreover, the band represented by Sacramento-based attorneys Michelle LaPena and Gertler said the government has other ways of halting drug smuggling besides building a wall.

They added: “Defendants are wrong to challenge La Posta’s traditional knowledge that the project is excavating Kumeyaay burial grounds, and split hairs to suggest these burial grounds are not historic cemeteries to avoid scrutiny.”

In a 13-page declaration, local history and anthropology expert Richard Carrico backed the band with a deep discussion of Kumeyaay ethnography.

“While it may be true that previous wall construction (conducted without benefit of ethnographic research or tribal consultation) placed a barrier across trails linking the Kumeyaay of San Diego County with the Kumeyaay of Baja California and, in doing so, impacted such trails, … this does not justify not addressing such trails in the cultural resource studies,” wrote Carrico, a San Diego State University and Mesa College lecturer.

“The Kumeyaay operated and used an extensive trail system to link their coastal villages with those of the eastern mountains and the desert. While many of the recorded trails are associated with travel, trade and procurement of resources, some are of a more spiritual and sacred nature,” he said.

Tribal members weren’t asking for a permanent halt to wall construction, however.

They sought an injunction until the government can “guarantee adequate consultation and protection of La Posta religious practices and cultural heritage.”

The suit states that construction should be halted until measures are taken to mitigate the potential impacts to cultural resources, such as establishing a formal tribal monitoring program with at least two tribal monitors at every construction site; allowing monitors to be close enough to the construction to witness any uncovering of cultural materials; and modifying proposed border security measures to alleviate impacts to tribal cultural and burial sites.

The lawsuit also alleges that funding for the border wall was unlawfully transferred from the Department of Defense to pay for its construction, citing a ruling issued in June by the 9th U.S. Circuit Court of Appeals.

The La Posta band alleges it has not been properly consulted by the government regarding the project or investigation of potential human remains, and that only one “cultural monitor” from the tribe has been allowed within the 21-mile project area.

The tribe alleges construction has already uncovered historic tribal burials and threatens a tribal historic cemetery in Jacumba. Some tribal members have taken to protesting the wall’s construction by physically blocking the paths of construction vehicles or standing in areas slated for pre-construction blasting.

I agree. From my viewpoint, all tribes have suffered enough in one way or another. The only sliver of light in this border wall case is the injection of the statement that the judge sides with the president "for now". Perhaps the La Posta Band can "lawyer up" and the present federal judge will overturn his initial decision in the Band's favor. Let's hope for a miracle.

I worked near the border at Otay lake for years, i saw many smugglers. One night I saw a car pull up with iit's lights off. In thirty seconds the doors and trunk opened and ten people got in.

The Border Patrol has a policy called sitting on the spot. Parking at a known smuggling area. Park two Agents there all day and night.

Give the tribes a break, they have suffered enough.