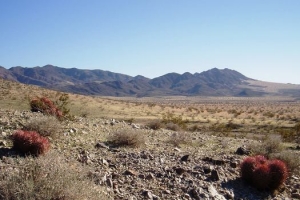 October 22, 2015 (Palm Springs)  -- Senator Dianne Feinstein is drumming up support for three proposed national monuments in the southern California desert by holding a public listening session this afternoon at the Whitewater Preserve near Palm Springs.

She introduced a bill earlier this year, the California Desert Conservation and Recreation Act of 2015, that would, among other things, create the Sand to Snow and Mojave Trails National Monuments in areas that are home to the endangered desert bighorn sheep and the threatened desert tortoise.

Stephanie Dashiell, a California representative with the nonprofit "Defenders of Wildlife," says Mojave Trails in particular is crucial to the survival of the desert tortoise, which has lost 90 percent of its population in some areas.

The Senate bill is stalled, waiting for a hearing in the Senate Committee on Energy and Natural Resources. So Feinstein has written to President Obama asking him to create national monuments at Sand to Snow, Mojave Trails, and a third area called Castle Mountain. Dashiell hopes the President will take matters into his own hands.

"The President can choose to use his authority under the Antiquities Act to sign an executive order protecting existing federal public lands," says Dashiell.

It would allow additional mining exploration and actually prevent the President from declaring a national monument in that area.