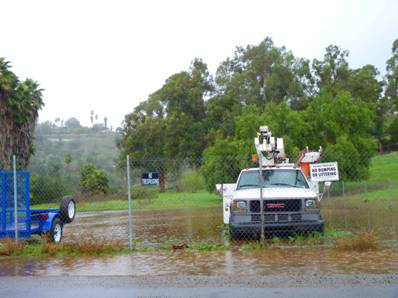 During historic 1998 El Niño season that created $550 million in damages, it was not until February that California experienced flooding damage that warranted a federal presidential declaration

February 16, 2016 (Oakland Calif.,) -- The Federal Emergency Management Agency (FEMA) today released new data on National Flood Insurance Program (NFIP) policies, showing an increase of more than 27,000 new NFIP policies written in California during the month of December 2015. There is a 30 – 90 day waiting period for new policies to be reported to FEMA and the latest available data, released today, shows an increase of more than 55,500 new flood insurance policies purchased in California from August 31 – December 31, 2015.

The nearly 25% increase for the state is the first of its kind in any state in the history of the National Flood Insurance Program, created in 1968.

Although the agency does not directly correlate all NFIP claims this year to El Niño, FEMA has already seen 127 National Flood Insurance Program policyholders submit claims in California during January 2016 compared to only 1 claim submitted in California for the same period during the previous year.

Although parts of FEMA Region 9 have recently been in a relative dry period, according to the National Weather Service, the impact of El Niño is not over.

“It has not been uncommon during past strong El Niño events to go through drier periods, even during the winter months,” said National Oceanic and Atmospheric Administration/National Weather Service meteorologist Scott Carpenter. “A change in the weather pattern around the last week of February may start bringing the storm track farther south and across more of California into March.”

NOAA's Climate Prediction Center forecasts climate anomalies associated with the ongoing El Niño episode are expected to result in at least minimal improvements to the drought conditions across much of California and western Nevada through the end of April.

NOAA's mission is to understand and predict changes in the Earth's environment, from the depths of the ocean to the surface of the sun and to conserve and manage our coastal and marine resources.

Flooding can happen anywhere, but certain areas are especially prone to serious flooding. Many areas in California are at increased flood risk from El Niño as a direct result of wildfires and drought.

Residents should be aware of a couple things:

o Get all the coverage you need. An agent can walk you through coverage options.

o Know your flood risk. Visit FloodSmart.gov (or call 1-800-427-2419) to learn more about individual flood risk, explore coverage options and to find an agent in your area.

In September 2015, FEMA’s Region 9 office in Oakland, Calif., established an El Niño Task Force with the mission of preparing for the impact of El Niño. The task force is evaluating the core capabilities needed to protect against, mitigate, respond to, and recover from any flooding that occurs across the Region this winter and spring. In December 2015, FEMA Region 9 released its draft El Niño severe weather response plan and convened a Regional interagency steering committee meeting in Northern California to exercise the plan. The plan is a living document and is continuously updated as new information on the El Niño threat emerges.

FEMA administers the National Flood Insurance Program and works closely with more than 80 private insurance companies to offer flood insurance to homeowners, renters, and business owners. In order to qualify for flood insurance, the home or business must be in a community that has joined the NFIP and agreed to enforce sound floodplain management standards.

NFIP is a federal program and offers flood insurance which can be purchased through private property and casualty insurance agents. Rates are set nationally and do not differ from company to company or agent to agent. These rates depend on many factors, which include the date and type of construction of your home, along with your building's level of risk.