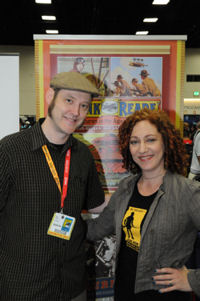 By Nadin Abbott
Photos by Tom Abbott
July 15, 2012 (San Diego) -- Women are involved in many aspects of the comics industry. At Comic-Con, ECM interviewed two women, Anina Bennet and Susie Cagle, who have left some power-packed marks in their own industry niches.
Bennett is the author, with her husband Paul Guinan, of Boilerplate: History’s Mechanical Marvel, and Frank Reade: Adventures in the Age of Invention. http://bigredhair.com

Cagle, a former journalist, has worked as a freelance cartoonist and reported on Occupy Oakland in the visual form. http://www.thisiswhatconcernsme.com/about-susie/

They could not be any more different in some ways if they tried. But both are involved in trying to educate while being entertaining.
Bennet was fascinated by history from early on. Since Boilerplate involves actual historical events, such as the Pullman strike, it is a mix of actual history with fiction. Because of this, her book has been used in “literature and critical thinking classes,” and it helps the reader to be entertained, while learning new things.
The other book she has worked on is Frank Reade: Adventures in the Age of Invention, set in the late 19th century. This is where we talked about censorship in comics, which has ebbed and flowed over the years. Frank Reade is actually based on the Frank Reade dime novels, and here she faced a little pushback from her editor, who was afraid that the use of a racially tinged term, which while used in the correct historical context, could lead to a bad reaction. Thankfully, her readers got it.
The other area where she faced pushback from her editor was in Boilerplate over the Pullman strike. She made more than clear that Mr. Pullman was not precisely nice to his employees. The Pullman strike began on May 11, 1894 and is considered a critical event in the history of organized labor. It began in Chicago but affected the whole country.
http://www.encyclopedia.chicagohistory.org/pages/1029.html
In the end the book went to print with little to no negative reaction.
Her editor was also concerned over the use of child labor photos. In the end, the editor agreed to run them, and the author never faced directly any censorship.
Bennet is excited that while Comic-Con has fans chasing the collective plastic exclusive figure (Yes the lines for some of those were insane), people also are “buying these covers,” which definitely have a more intellectual bent to them.
When ECM sat down to talk to Cagle, we asked about the differences between Occupy San Diego and Occupy Oakland. According to her, Occupy Oakland came from the “very political history” which they share with Berkeley. 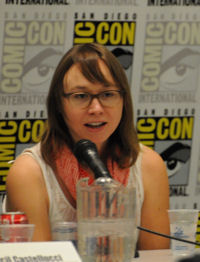 Occupy Oakland came from the deep history that includes the Black Panthers, with a lot of its members having ties to it. From the beginning, Occupy Oakland “gathered a very radical community,” she said. They made it clear from the beginning that they were “in solidarity with Occupy Wall Street” but not part of it. It was also, from the beginning anti-police and anti-capitalist. None of this should have come as a surprise, since Oakland is a “very left field progressive.”
She also mentioned that the movement has suffered serious internal strife. Those who came in on day one, were gone by November. In fact, the majority who participated in the port shut down, were driven away by a minority that had their own interests and goals. There were 30,000 to 40,000 people during the port shut down, but now most of them are no longer participants, and there have been some counter protests.
Cagle also mentioned another important aspect. “People are scared, but they perceive themselves as brave.” They do not want to admit to their fears, even if they are very reasonable, because to admit to fear would mean believing that police are winning.
http://www.cartoonistsrights.org/upload/SusieCagleToonOccupyOakland.jpg
What was her role during the Occupy Oakland? She was freelancing. Her job was to draw, and at times a pad is easier to approach than even a camera. She also started drawing after she was fired as a journalist in 2009, with the mass firings the media saw.
Cartooning, it seems, runs in the blood. Her father is Daryl Cagle, and you can find his work at MSNBC. http://cartoonblog.msnbc.msn.com/