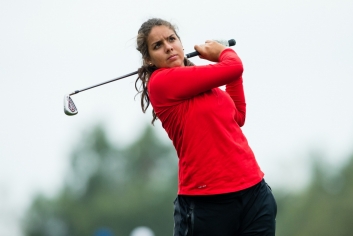 Aztecs in fourth place as a team after 36 holes

Escauriza posted cards of 72 and a career-low 67, highlighted by a team-high nine birdies, including six in round two. Among her conversions in the afternoon session was an impressive drain on the par-4, 397-yard No. 2, which ranked as the toughest hole of the day. For her efforts, the 2017 Mountain West individual champion climbed 14 places between the first and second rounds, along with California’s Cindy Oh.

Also in contention on a crowded leaderboard is SDSU’s Gioia Carpinelli (Boppelsen, Switzerland), who displayed some upward mobility of her own, climbing six places into a six-way logjam for 10th place at 2-under 142 (72-70). The Aztec sophomore notched a team-high 28 pars on the day to go with five birdies, including a successful make in round two on the par-4, 407-yard No. 10, which ranked as the second-most difficult hole on Monday.

Conversely, Sara Kjellker (Hollviken, Sweden) experience the opposite fate, tumbling 17 places into tie for 19th at even-par 144. The SDSU sophomore was tied for second through 18 holes after carding a 69, notching five birdies against two bogeys. However, Kjellker was unable to sustain the momentum in the afternoon as five bogeys proved too much to overcome.

Despite shooting consecutive 75s, Kitty Tam (Hong Kong, China) lost ground as well, slipping 11 places into a tie for 54th at 6-over 150. The Aztec senior was even through 14 holes after making birdie at the par-3 third, followed by a par at No. 4. However, three bogeys on her final four greens hastened her drop.

Elsewhere, fellow classmate Daniela Anastasi (La Jolla, Calif.) completed the first two rounds in a tie for 67th at 9-over 153 (78-75). In just her second varsity start in a Scarlet and Black uniform, the La Jolla High alumna closed the afternoon on a high note, logging a par-4 at No. 6, followed by a birdie on her finishing hole, the par-4, 375-yard seventh.

The SDSU delegation also featured freshman Tatum Mahon (San Diego, Calif.), an individual competitor who registered cards of 85 and 84 in her collegiate debut.

The Branch Law Firm/Dick McGuire Invitational concludes on Tuesday when San Diego State tees off alongside UC Davis and Colorado in a shotgun start at 7:30 a.m. MT/6:30 p.m. PT.