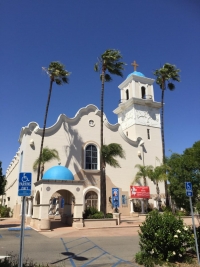 Fiddler on the Roof is a musical with music by Jerry Bock, lyrics by Sheldon Harnick, and book by Joseph Stein, The story of Tevye, a milk man, his wife Golde, and his five daughters on a settlement in Imperial Russia, 1905. The story of the eldest must marry first, and so on down the line. Filled with wonderful songs such as; "If I were a Rich Man", and  "Matchmaker, Matchmaker".

The original Broadway show in 1964 was the first musical show to surpass 3000 performances St. John's has but six so come out and support this Tony Award winning show while you have the chance.

The show is mainly youth, but all ages are involved. And all are welcome. If you or someone you know would like to be involved in the next show call the Parish office early January 2016 to find out when you can audition. It's a real sense of community, lots of fun, and a great experience.

Tickets are $15 purchased at the door.