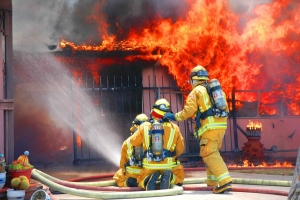 San Diego voters have previously voted down an initiative that would have created a parcel tax to fund firefighting. But according to CPI, the City’s revenues fall $279 million below the statewide average collected by California’s ten largest cities. San Diego ranks dead last in business fees ($79 a year, on average, compared to $610 paid by businesses statewide). General fund revenues were the lowest of all major California cities (2.26%) compared to household income level—even before the recession hit. Our city also has far lower taxes on hotels, trash collection, utility taxes and other significant revenue sources.

In short, voters are getting what they paid for--public safety up in smoke. 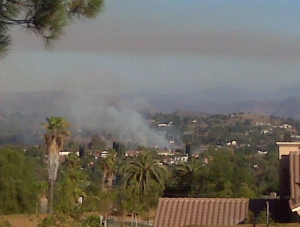 How bad is it?

After $11 million was cut from the City’s fire department budget, San Diego now achieves a five-minute emergency response time barely more than half the time (54%). That’s way below the National Fire Protection Association standard, which strives to have the first fire engine or ambulance arrive within five minutes of receiving an emergency call, 90% of the time.

Without more money, the City also will likely face closure of libraries and parks, in addition to slashing firefighting. CPI urges that revenues be raised to the statewide average, a boost of $279 a year, which CPI concludes would be enough to solve the budget crisis. Without a revenue increase, the city faces a massive budget shortfall.

Councilwoman Donna Frye has proposed a sales tax initiative tied to spending reforms, a plan she estimates would generate $100 million.

The County and some incorporated cities also face challenges in funding firefighting. The Citygate Deployment Study report found that 14 new fire stations are needed Countywide, including 11 in the City of San Diego. Currently, our region falls well below recognized standards for the number of fire stations per square miles. Some existing stations are aging and dilapidated.

Congressman Bob Filner (D-San Diego) announced this week that he is introducing the Firefighting Invetment, Renewal and Employment (FIRE) Act (HR 5858). The bill would authorize assistance to fire station construction grants at $210 million a year.

“Our firefighters put their lives on the line each and every day without hesitation,” Filner stated. “Yet in many of our communities we have outdated and deteriorating fire stations and many of our more rural areas have no facilities at all.” 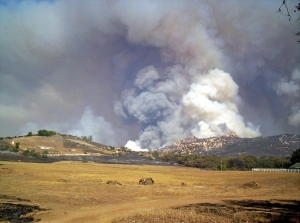 In the San Miguel Fire District, which serves much of East County, lack of fire stations isn’t the biggest problem, says Chief August Ghio. Despite a new state-of-the-art station, the District recently cut an engine company because of budget problems and has considered further cutbacks.

That's a chilling prospect for backcountry residents who undestand that cuts in staffing across multiple fire departments could mean less mutual response aid in a regional crisis, such as the multiple raging wildfires that occurred here in 2003 and again in 2007 (photo, left).

“Our real issue is staffing,” Ghio told East County Magazine. “Our most significant need in the unincorporated areas of the County referred to as CSA (Community Service Area) is staffing of the San Diego County Fire Authority fire stations that Cal Fire has the contract to provide service through. The Citygate Deployment Study report recommends that the staffing in those 30 stations be enhanced by the County providing a 40-hour per week, paid firefighter in each of those stations.”

Such a move would improve response time during peak demand times, since it’s difficult to staff consistently utilizing volunteers or even paid on-call personnel, Ghio added.

A federal Assistance to Firefighters Grant has in the past allowed jurisdictions to replace lost staffing, but it was limited to a two-year period and did not fully cover costs to a district, added Ghio, who is serving on a regional committee established by the County to review the Citygate report and develop priorities based on its recommendations.

Last week, the death of two-year-old Bently Do (photo, right), who choked to death on a gumball after San Diego Fire & Rescue took nine and a half minutes to respond to a 911 call, highlighted the tragic consequences of underfunding firefighting.

Despite the tragedy—and the prospect of further firefighting cuts in the future, San Diego’s City Council remains divided on whether to place an initiative on the ballot that would allow voters to choose whether to approve a tax increase to fund firefighting or other vital services.

Councilman Tony Young asked Mayor Jerry Sanders to immediately restore the cuts in fire and emergency staffing by tapping reserves or cutting other budget areas. “I am deeply saddened by the unfortunate death of 2-year-old Bentley Do,” he wrote. “I cannot in good conscience stand by and not ask you to end the ‘brownouts’ in the San Diego Fire Department immediately.”

But Councilman Kevin Falconer concluded, “I remain opposed to asking San Diego taxpayers to pay more in taxes in the midst of the worst recession in 40 years.”

In the past several years there have been propositions on the ballot to fund the Rural Fire District. They have failed due to the fact that they are unreasonable. They wanted to charge property owners some $50 to $60 per PARCEL for fire protection. Not per house. Per parcel. Many properties in east county have homes sitting on several parcels. That adds up. Many land owners are land rich and money poor. (That's me). Taxes are high enough on this land, without having to pay exorbitant rates on land that is idle.
When they come up with reasonable fees for fire suppression, I will happily pay, but I can not afford to pay these fees per parcel and acreage, just not do-able. That's why I have voted no on these propositions and prayed that they didn't pass.
Come up with something reasonable so I can feel good that I'm voting for something that will support my fire protection agencies and yet not have to lose my land to taxes.

"“Our real issue is staffing,” Ghio told East County Magazine. “Our most significant need in the unincorporated areas of the County referred to as CSA (Community Service Area) is staffing of the San Diego County Fire Authority fire stations that Cal Fire has the contract to provide service through." Cal Far DOES NOT staff all the CSA's. The majority of them are volunteer departments who pull staffing from their own pool or the County Fire Authority pool, which Cal Fire is responsible for training. ( By the way all CSA's are one CSA now, CSA135 but their operations and authority are unchanged.) Cal Fire DOES have an agreement with a number of fire agencies to staff their stations e.g. Rural Fire and Pine Valley Fire. As to solving the real problem of sufficent manpower - IT AIN'T GOING TO HAPPEN! Since State law does not require the Board of Supervisors to provide funding for a "real" county fire department they won't!

I believe Augie was referring specifically to his San Miguel district with that remark, not all the CSAs.  Each has its own unique needs.

Do you think there's a need to change state law to require a county fire dept?