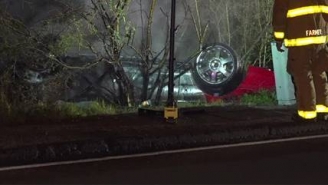 February 26, 2019 (Lakeside) – A 1995 red Ford Mustang traveling at a high rate of speed struck a raised curb and rolled over, catching fire around 2:47 a.m.  The occupants of the vehicle had fled the scene by the time emergency responders arrived and it’s unknown who was driving the vehicle.

“There were reports to the Fire Department that the Ford may have been speeding or racing with another vehicle prior to the collision. This report has not been confirmed as we are still attempting to contact the driver of the Ford and witnesses,” says Officer Travis Garrow with the California Highway Patrol.

The CHP is looking for possible witnesses to this collision.  Anyone with information regarding this collision is urged to contact the CHP at 619-401-2000.

It’s unknown if any other vehicles were involved and at this time it is unclear if alcohol and or drugs were a factor, Officer Garrow says.

Wildcat Canyon Road was closed in both directions for two hours while fire personnel extinguished the flames and tow trucks recovered the Ford.