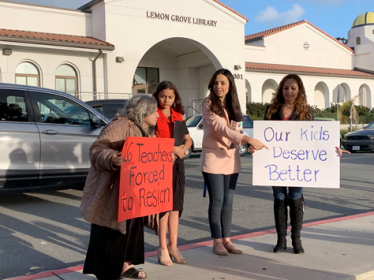 March 13, 2019 (Lemon Grove) – The community room at the Lemon Grove Library quickly overfilled last night as parents, students, teachers, and community members gathered to share their united concern for what they collectively referred to as the “firing” of 16 teachers.” With all chairs filled, attendees began congregating against the sides and doors of the room, some standing just outside the door to listen in.

In an official statement released in anticipation of a contentious meeting, the school board’s statement asserts that “some misinformation was shared.” The press release states that certain probationary teachers were “notified of their recommendation for release” during “their two years of probation” but that the district would “maintain the same number of teachers and classes” in the fall. Of the “47 probationary teaches” the district emphasized it would retain “31 of that pool. All 16 of these probationary teacher positions will be rehired for the 2019-2020 school year.”

During opening remarks by school board members, Vice President Katie Dexter set the tone for the board’s response. Dexter voiced how “disappointed,” she was “in how fast misinformation will spread. No one asked question. No one went through channels.” Dexter refuted the belief that “we were targeting people for speaking out or using sick days.” Dexter asserted the school board’s decisions were “to move the district to the next level,” and offered that “while the road might not be comfortable, it will lead to a better future.” 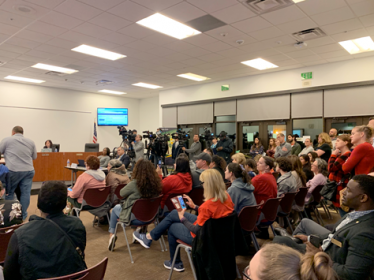 Earlier Tuesday, before the school board meeting, Denise Crano, president of the Lemon Grove California School Employees Association (CSEA), told ECM that there was “upheaval” in Mount Vernon Elementary school because of the non-reelection of non-tenured teachers who were seen as the most vocal advocates for students with special needs. Crano indicated there was only one resource specialist at that school.

“Transparency is gone,” Crano reflected. Crano tied the newfound lack of transparency to changes in the administration. The Superintendent, assistant superintendent, and executive director of general services were all new in the last four years. Additionally, three principals are new, according to Crano.

“We weren’t broken before, but we were broken now,” Crano lamented. “Lemon Grove claims to be the Best School District on Earth, but,” Crano asserted, “moral is down, parent moral is down, and so are the students.”

When asked who would be most affected by this decision, Crano indicated, “the students” because “teachers already know our kids, and if you take them away then you’re starting from scratch.”

Crano included that the district had until March 15 to notify tenured staff of any action and that classified staff notice deadline wasn’t until June 4.

Rosa Carney, a parent of two children at Mount Vernon and a member of the school site council and English Learner Advisory Committee (ELAC), shared her heartbreak with the school board’s decision.

Carney stressed that these teachers implemented programs and purchased resources at their own expense, underscoring their commitment to the students. Carney shared that once when teachers asked for donations, the district told them to cancel the request. Carney also generally was against many new initiatives she said were either poorly thought out or poorly communicated.

High on her list was the raptor system implemented in January. The Raptor Visitor Management System instantly screens driver’s license of all visitors, volunteers, and contractors against the national sex offender registry. While Carney is “all for safety,” she believes the system serves to discourage immigrant and poor families from walking their children to their assigned lines before classes begin. Carney stressed that this was “pushing parents away.” Before, parents could drop their kids off and talk briefly with their students’ teacher. Now, there is administration in the hallways that “asks parents to leave.”

Carney also highlighted waste in the purchasing of curriculum for the dual language programs, indicating there were myriad errors in the Spanish content and that the ELAC and other relevant committees were not given the opportunity to review it before it was purchased.

“Before the new administration, we had a community. We could communicate freely,” Carney lamented.

Pierre Finney, president of the Lemon Grove Teacher’s Association, made clear “these are not layoffs.” Finney explained “per the [education] code, the District has the ability, at any time, to not renew contracts for probationary teachers,” emphasizing that “the district doesn’t have to give us a reason.”

Finney, who has been active with the union for 10 years, stated the number of non-reelections was unusual. “Typically, there has been zero to three,” she elaborated.

Finney explained the teachers were notified on Wednesday of the decision and were given a courtesy option to resign rather than receive a non-reelect on the record. Finney expressed concern about the way this process unfolded. “Teachers were given two days to make a decision. They were told on Wednesday and given until Friday morning at 8 a.m. to make a decision on whether to resign or not.” 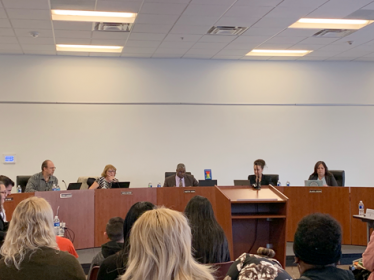 President Timothy Shaw attempted to limit speaking times to 20 minutes per agenda item despite over 100 people in attendance and over 20 speaker slips submitted. Each speaker was to be given three minutes to speak, meaning only seven people would be able to speak per item. After multiple interruptions from the audience and a plea from school board member Jay Bass, every person who timely submitted a speaker card was allowed to speak.

Paula Hoffman, a concerned community member, reminded the audience that Lemon Grove was “famous for 1930s illegal school segregation,” referencing a desegregation lawsuit to protect the rights of Mexican-American children. She provided historical context for the current “inequity” in the school district. Hoffman reminded the audience of a time when “ESL students being bused to a different school district.” She claimed the modern inequities were “clear Williams Act violations.” Hoffman asserted “teachers who have complained are being fired.” To her, the school district has demonstrated “cronyism and nepotism” and highlighted the “shocking remodeling of the new office for the superintendent.”

Pandora Minegas emphasized that “the best teachers speak up for children, even if it’s during their probationary period.

Emma Contreras, an eight-grade student at Mount Vernon, shared testimony in between tears. Contreras expressed frustration over losing her teacher and having substitute teachers for a month and a half.

Yusef Miller shared support for the “sixteen teachers, beloved by the community.” Miller emphasized that even the “appearance of retaliation” and a “hostile environment” would adversely impact the district. To Miller, “the priority is to stand up for justice and what we’re teaching [the students] is that if you do that, you’re the target, you’re the enemy. We are trying to teach our children something valuable and you have missed the mark.”

Elia Alcantara has been a longtime volunteer with the district and spoke in Spanish, with a translator providing what audience members called inaccurate translation services. Alcantara stated “our schools have fallen for fault of leadership.” Alcantara stressed that since the arrival of Superintendent Kimberly Berman, and assistant superintendents Yolanda Rogers and Eddie Caballero, the “schools have changed for the worse.” Alcantara shared her belief that “quality of education is down” and her disgust with limited resourced including “limits on how many Kleenex tissues students can use.”

Logan, age nine, stated “I don’t think my math teacher should be replaced because she’s really patient.” He shared that he was diagnosed with ADHD and that his teacher takes the time to explain things to him.

Shane Parmely, a San Diego-based teacher who made headlines in summer 2017 for video recording her refusal to answer citizenship questions at a New Mexico border patrol check point, spoke. She began by noting that six Sheriff’s deputies were called to the meeting “with guns, batons, and pepper spray.” Parmely asserted this is what “they do when they are afraid of you and want to silence you.” She stressed that the board had the deputies come into the room “where you don’t know the immigration status” of the parents. She juxtaposed the board’s discussion about “trauma-informed care” with the deputies’ presence. To Parmely, this “sounds like a group non-reelect which is against the code and also sounds like retaliation.”

Liana LeBarron was at the meeting passing out printed notices from a group calling themselves “Lemon Grove Parents United.” In her statement, she echoed those in the notice. LeBarron was concerned the “school district went from great to absolute junk.” LeBarron was also critical of what she claimed was the district’s efforts to silence teachers and parents. She alleged Human Resources instructed teachers affected by the decision to not reelect to retract social media posts. Additionally, LeBarron claims, teachers were told to tell parents that their “presence at the board meeting is not required.”

Mark Lane, a parent with kids in Mount Vernon, told the board they “should be embarrassed.” West chided Shaw’s inability to pronounce teachers’ names who had been at the district for many years. Lane also confronted Burman indicating “I keep seeing you on your phone. You’re on your phone right now. That’s rude, that’s condescending.” To Rogers, West claimed she was “smirking” during testimony. Lane emphasized that the board was there to represent the parents and students. “You’re not here to represent Roger and Caballero and Burman, you’re here to represent us.”

Lane promised to run campaigns to unseat four of the five school board members. This sentiment was echoed by a handful of parents and community members who spoke, each expressing an ultimate goal of replacing the Superintendent and assistant superintendents.

Board Actions on Resignations

Earlier in the agenda, one teacher, identified as Employee #601470 in Resolution 18-19-11, was set to receive a non-reelection but per Rogers’ comments, “submitted a resignation notice after the agenda was produced.” Rogers recommended the board accept the resignation in lieu of the official non-reelection. The board unanimously voted to accept this resignation.

Despite the board’s press release indicating that misinformation was shared regarding agenda items “4a, 4b, and 4c,” all action items open to discussion, the real controversy was in the consent agenda item “5a. Personal Action Report,” which listed the remaining fifteen teachers who had chosen to submit resignations for “personal reasons” effective June 17, 2019 rather than receive a formal non-reelection.

Per the agenda, “All consent agenda items are recurring ones that are considered routine by the Governing Board and will be enacted with one motion. Separate discussion of an item will be as requested, and the item will be considered following approval of the balance of the agenda.”

No board members requested discussion on any consent agenda item which included other items, including approval of minutes, gifts to the district, and other financial items.

Ultimately, the resignations of the probationary teachers and other consent agenda items were approved on a close 3-2 vote with no discussion.

Dexter motioned to increase board member salaries by five percent but failed to secure a second to her motion, thereby failing to advance the item for a vote.

In voting to approve the twice-annually required financial certifications for the school district, the board also voted to increase reserves by an additional five percent.

Do you want to see more coverage of the Lemon Grove School Board and other Lemon Grove community news? Please donate to support our nonprofit reporting in the public interest: http://www.eastcountymagazine.org/donate.

For years it has been noted that Administrators and Unions have been the tail wagging the dog; when it comes to graduating students from school = educated. There is no middle of the road here..........get good teachers, fire bad and get the administrators to administrate and fire the Unions!