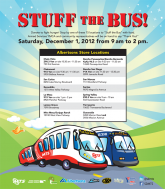 November 25, 2012 (San Diego) - Within the last five years, the number of San Diego residents relying on the Jacobs & Cushman San Diego Food Bank for their meals has almost doubled. In these challenging economic times, the Food Bank is feeding more than 350,000 people countywide each month.

With so many families struggling to put food on their tables this holiday season, the time for action is now and the region’s transit operators and Albertsons are responding with the Fifth Annual “Stuff the Bus” Holiday Food Drive for the Jacobs & Cushman San Diego Food Bank.

In addition, all 41 Albertsons stores in San Diego County will be selling pre -packaged bags of nutritious and non-perishable food items for $5 and $10.  The bags will be on sale November 26 through 29. On Saturday, all donated bags will be added to the “Stuff the Bus” donations.

“The ‘Stuff the Bus’ Holiday Food Drive lets San Diego’s transit agencies help our community in a big way,” noted MTS Board Chairman Harry Mathis. “This one-day effort has the potential to collect 15,000 pounds of food. The food will go to those in need, the majority of who are low-income and working poor families with children.”

NCTD Board Chairman and City of San Marcos Councilmember Chris Orlando says, “We also are mindful that this includes more than 13,000 low-income military personnel and their dependents who live in San Diego and receive this critical assistance from organizations that work with the Food Bank.”

Steffens adds, “We want to thank MTS, NCTD, Albertsons, and the entire San Diego community for making sure families in need will be able to celebrate the holidays without having to wonder where their next meal will come from.”

middle class families are struggling to put food on the table for their families over the holidays – so the ‘Stuff the Bus’ Food Drive is very important to us.”

On December 1, transit volunteers and Armed Services YMCA military families will be stationed at each of the 15 Albertsons stores from 9:00 a.m. to 2:00 p.m. to thank donors for their support and participation.  At 2:00 p.m. the buses will caravan to the Food Bank where a cadre of military volunteers will be waiting to unload each bus as it pulls in. For a list of the 15 “Stuff the Bus” locations or a list of non-perishable foods items to donate, visit www.sdmts.com.