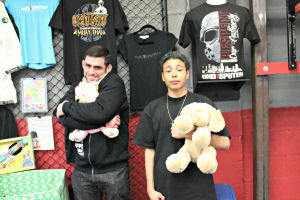 December 27, 2012 (El Cajon)--The Marquez vs Pacquiao fight has nothing over the boxers (and stuffed animal lovers) at El Cajon’s Und1sputed Fitness and Training Center. Boxers Andy Murad and 14-year-old high school student Anthony Cesena were among those who pitched in to help during the Center’s toy drive, Christmas party, and fight club exhibition held Saturday, December 15.

The Center, located on Main Street, offers boxing, muay tai, and other fitness lessons to youth and adults.  At the toy drive and fight exhibition Murad 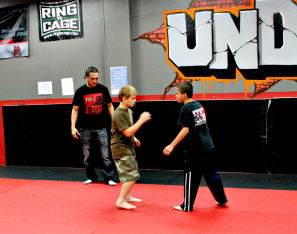 calmly stated that “he was the main event” for the night.  He is up-and-coming in his age range in boxing.

Also known as a fighter is Sean Najjar, a Spring Valley resident, who will be fighting a M.M.A.  (mixed martial arts) title fight on January 25, 2013 at the Sheraton-Four Points in Kearny Mesa. Najjar has also helped out as a trainer at the Center. Najjar will represent the East County center at the fight. Najjar is pictured over-seeing the fight exhibition on December 15.

Perhaps the fighters will agree with boxing legend Muhammad Ali, who once observed, “Float like a butterfly, sting like a bee” According to Muhammad Ali: His Life and Times.