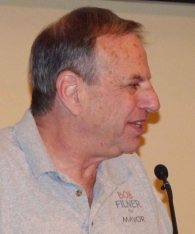 March 13, 2012 (San Diego) – “What if we can have food and water sustainability here? “ Congressman Bob Filner, also a candidate for Mayor, asked. Filner reiterated his plan to make San Diego a national model of sustainability for energy, water and food, the unveiled a new vision:  “What if we had a food hub in San Diego?”

His plans provided abundant food for thought at the Forging a Sustainable Future Conference sponsored by UnitedGREEN at San Diego State University earlier this month.

Filner envisions a food hub with a wholesale and resale market for locally grown healthy foods, similar to the world-famous Pike Place Market in Seattle.  School systems could buy fresh foods for school lunches. Parents and other residents could shop for foods grown by local farmers, and much more.

Filner noted the absurdity of locally grown agricultural products being shipped to Los Angeles and beyond, while many San Diegans lack access to affordable, fresh foods.  Some local foods are even shipped to L.A., then back here again, driving up prices. 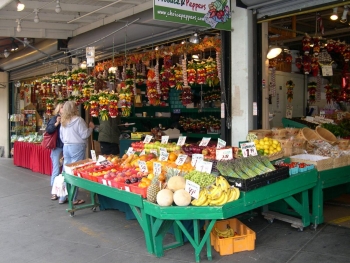 “Transportation cost is the biggest factor,” he said, adding that access to healthy foods shouldn’t be a partisan issue.

“Conservative and liberal parents all want their kids to eat healthy and not be obese.” But he laments, “Stupid bureaucratic rules have stopped urban agriculture.”

That would change under a Filner administration at City Hall. He is having a contest to rename the county’s department of developmental services, which merged with the department of planning and land use.

“The best idea so far is A-PLUS—that stands for prosperity, livability, and urban sustainability,” he said.  “Healthy is a powerful word. What if we attach it to everything we do—healthy energy, healthy streets. You don’t have to give up your lifestyles—in fact your lifestyle gets even better. But established corporate interests want you to think it’s more money.”

He took a jab at opponent Carl De Maio, the Republican-endorsed mayoral candidate.  “Forget what Mr. De Maio says,”  noting De Maio wants to cut government. “Let’s aggregate…I think we can get a food hub up quickly to show we can do this, that it’s feasible and that we can afford it.” 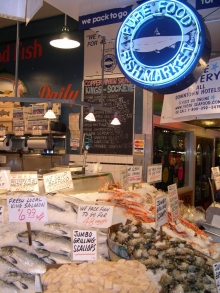 “We can have hydroponic gardens.  Tourists can drop in,” said the Congressman, who envisions markets and cafes as part of his food hub, along with access to fresh fish caught by local ships.

He also called for energy sustainability—but not through industrial-scale energy projects favored by corporations like SDG&E.   Instead, Filner advocates for rooftop solar and would make the City of San Diego a model by requiring public buildings be retrofitted for solar and incentivizing other businesses and homeowners to do the same.  “This would spur on many small businesses,” he said, adding that his plan would create jobs.

Although he is running for mayor of the City of San Diego, he believes as mayor he could influence policies county-wide. “The city has 40% of the vote on SANDAG [the San Diego Association of Government],” he noted. “With one other city, we can deal with SANDAG issues.”

He faulted SANDAG for approving a regional transportation plan that failed to meet state standards for emissions reductions.  “The Attorney General  rightfull y sued,” he said.

Filner exuded confidence in his plans for regional sustainability in food, water and energy, drawing applause from the crowd.

“With the power in this room,” he said, acknowledging the many experts present on sustainability issues, “we can do this here in San Diego…This can happen.  It’s leadership locally because everyone wants it to happen.”

The Congressman, who has previously served as Deputy Mayor of San Diego and President of the San Diego School Board, has some familiarity with taking on tough causes.  Once a Freedom Rider during the turbulent Civil Rights Movement that culminated in passage of the Civil Rights Act by Congress, he retains a progressive vision.