“The official casualty count of Iraq and Afghanistan is 5,000 plus killed and about 45,000 wounded…You know how many men and women have approached the VA for help for war-related injuries from those two wars? Almost a million," said Congressman Bob Filner. "We need to take care of these kids when they get back here…Veterans are THE issue for Democrats.”

By Miriam Raftery and Mia Mykleberg 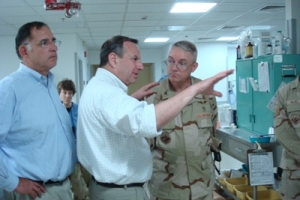 At the California Democratic Party’s newly formed Veterans’ Caucus, Congressman and Mayoral candidate Bob Filner, former Chairman of the Veterans Affairs Committee in the House of Representatives, laid out detailed plans to welcome home veterans with respect and hands-on help--including establishing a Veterans' Office for San Diego if he is elected Mayor.

“We will open up for the first time a Veterans’ Office and we will make sure that jobs, jobs, jobs are the first three priorities that we do for all these folks coming home,” he said, drawing frequent applause as he spoke.

Filner also called for changes to help women military members and veterans, eliminate homelessness and  reduce the shocking number of suicides among our nation’s veterans. 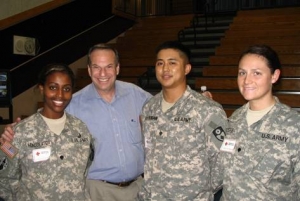 When Filner became chair of the House Veterans Affairs Committee, he resolved to make the Democratic Party the “party for veterans” and implemented many reforms.  But after the House changed hands to Republican control—and a GOP committee chair, funds for many proposals to help veterans were blocked. Filner said he found Washington to be “so dysfunctional that I decided we could do more for veterans back home,” hence his decision to run for Mayor.

As Chair, he authored the G.I. Bill for the 21st century, which was signed into law by President Barack Obama.  “We have 600,000 of our young men and women in college because of that bill,”  said Filner, son of a World War II veteran who benefitted from the first GI bill that he credits with creating America’s middle class. The new measure by Filner now allows veterans to pass along benefits to their children or spouse.

He also pushed through a bill to increase funding for treatment of mental illnesses in the Veterans Administration (VA).

“That’s the good news. The bad news is we still have a hell of a job to do,” he said. Iraq and Afghanistan veterans have often faced multiple deployments, mental illnesses and traumatic brain injuries, surviving wounds that would have killed soldiers in the past.

The official casualty count for the Iraq and Afghanistan wars is 5,000 killed, 45,000 wounded.  But Filner reveals the real number is many times higher. 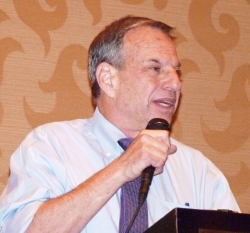 “You know how many young men and women, and for that matter older men and women, have approached the VA for war-related injuries from those two wars?  Almost a million,” he revealed. “We need to take care of these kids when they get back here…We haven’t told the truth to the American people about the effect of those wars.”

Here’s another shocking statistic.  “There have been more suicides by Vietnam veterans than died in the original war. That’s over 55,000,” Filner said.  “That’s a horrible, horrible statement to have to make in America.”

Tragically, suicide rates are also high among veterans returning from the Iraq and Afghanistan wars, he observed.  “We cannot just say `Welcome home’ and have a parade.”

Still in Congress for the remainder of the year, Filner wants to equalize rights for women veterans, especially those seeking medical care at the VA.  He put through a Bill of Rights for VA Female Patients while Chair of the Veterans Affairs Committee, but the Senate did not act on it.

“That is shameful,” he said.  Some doctors have also voiced disbelieve that women’s injuries were sustained in combat. One doctor, meeting a female whose arm was shot off at Fallujah, asked if she had cancer, Filner noted.  He called on Democrats and Americans to “treat them [women veterans] with respect and give them the services that they have earned.”

Filner also wants to see claims approved for Vietnam veterans who have Agent Orange health claims pending.  “You all suffered too long,” he told veterans present.  “It is time to make peace to the Vietnam Veterans and to welcome them home.”

After studying the health impacts Agent Orange caused for U.S. veterans—damages only recently recognized by the federal government, Filner said he started to wondering what the toxic defoliant did to the people of Vietnam.  So he recently traveled there—and made a terrible discovery.

“We have left now three generations of hundreds of thousands of birth defects in children, from zero limbs to six limb, and as a nation what have we done? Pretty much nothing,” Congressman Filner said.  “We need to take some responsibility as a nation,” he added, noting that America has technology such as prosthetics that can help children born with deformities.

He added that he has met veterans suffering from post-traumatic stress disorder (PTSD) who “found their healing by going back to Vietnam to help those who have suffered...We have to bring an end to the suffering that we brought there, and I hope that you will join me.”

Filner, who squares off against three prominent Republicans in the Mayoral race, emphasized to his party’s Veterans Caucus that “Veterans are THE issue for the Democratic Party…We are the ones who are going to make sure that you get the help when you get home. Democrats are the party of Veterans.”