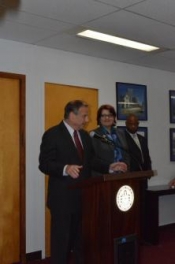 July 27, 2013 (San Diego)—One day after the County Democratic Party voted overwhelmingly to call for his resignation, Mayor Bob Filner announced today that he is not stepping down.

Instead Filner announced that he will enter therapy on starting on August 5.

“I will be entering a behavior counseling clinic to undergo two weeks of intensive therapy to begin the process of addressing my behavior,” he announced at a press conference Friday. 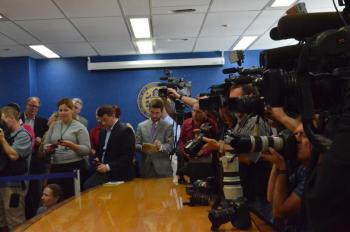 The conference was a strange one, as there was a microphone failure and the whole podium had to be replaced, to make sure the sound system worked. Filner stepped out of the conference room where this press conference was called on short notice, while technicians fixed the system.

The small room was an odd choice, excluding many press members, leaving 20 to 30 reporters outside.

After the Mayor finished reading his statement, he refused to answer any questions from local, state, national or international media.

Here is the Mayor’s statement in full.

"Let me be absolutely clear. The behavior I have engaged in over many years is wrong. My failure to respect women, and the intimidating contact is inexcusable. It has undermined what I have spent my whole professional life working on, fighting for equality and justice for all people. It is simply not acceptable for me to try to explain away my conduct as the product of the standards of a different generation.

Over the last week or so, I have reached out to the men and women who have served on my staff and others I have worked with over the years to apologize for my behavior. In addition, we have instituted changes in how the mayor's office is run. However, words alone are not enough. I am responsible for my conduct, and I must take responsibility for my conduct by taking action so that such conduct does not ever happen again.

So, beginning on Aug. 5, I will be entering a behavior counseling clinic to undergo two weeks of intensive therapy to begin the process of addressing my behavior. During this time period, I will be at the clinic full-time, though every morning and evening I will be briefed on city activities. This intensive counseling will just be the first step in what will be a continuing program that will involve ongoing regular counseling.

However, before I even ask, before I even think of asking for forgiveness, I must demonstrate that my behavior has changed. And that will only happen over time and only if such incidents never, ever happen again.

So when I return on Aug. 19, my focus will be on making sure that I am doing right by the city in terms of being the best mayor I can be, and the best person I must be."

bill clinton was accused by at least 4 women of groping, assaults on at least 3 of them including slapping them, and of course his years and years of infidelity.  at the time the media said "so  what" it is his "private life" or the women were all liars.

so is it bad or not?  if its bad then speak out against clinton or else the hypocrisy will be obvious

Hands down the biggest embarrassment in San Diego mayoral history.