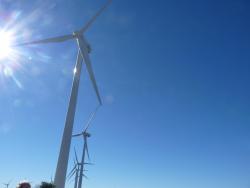 Iberdrola, the world’s largest operator of wind farms, sold off $1.1 billion in assets in 2012 to reduce its staggering 32 million euros of debt as the company's Standard and Poors Rating teetered just above junk bond status.  Assets sold included 32 wind farms in France to GE.

Iberdrola also divested itself of some natural gas assets and  in the U .S., Energy Network, Energetix and NYSEG Solutions. In addition, the company has has quietly abandoned efforts to pursue at least one U.S. wind project and potentially more.

In New York, the Watertown Daily News reports Iberdrola has removed meteorological testing towers at its Stone Church wind site in Hammond and is no longer pursuing the project, quoting Copleman.  Revelations of major conflicts of interest among decision makers on the town council had surfaced in Hammond, where numerous councilmembers and planners had lands that would be leased to Iberdrola, financial investments that could yield profits from the project, or relatives employed by Iberdrola.

The Thousand Islands Sun, a small local newspaper with no online edition, reportedly published that Iberdrola Business Development Manager Jenny Briot has stated that the company is canceling 100 projects in the United States, according to leaseholder James Pitcher.

Copleman denies that 100 projects are being cancelled.  He told ECM that the company has shut down some meteorological towers as part of “right-sizing” but declined to state how many.

The Bolivian government seized two electricity distribution companies owned by Iberdrola in late December, but has indicated it will compensate the company.

Iberdrola’s financial outlook was also negatively impacted by the Congressional delay until January to renew the wind production tax credit, however the renewal language will make it easier to qualify future projects for the massive federal subsidies, since projects now only need to break ground—not meet construction milestones—to obtain the tax credits.

Long-term financial stability of renewable energy companies is a critical question in East County, where Amonix Solar proposed an 800-acre industrial solar farm shortly before it filed for bankruptcy and abandoned the project.  Elsewhere in the world, wind turbines have been abandoned and left to rust in Hawaii, California and elsewhere when turbine developers or manufacturers failed.

Paul Gipe, a former wind company executive in California, has said that the tax-credit frenzy was to blame. "The lure of quick riches resulted in shoddy products that littered California with poorly operating--sometimes non-operating -- turbines," London's Daily Mail reported. "But thanks to the subsidies, it hardly mattered that some of the untested turbines were so sub-standard they barely even worked. Not to put too fine a point on it, for some wind energy investors it was simply a tax scam."