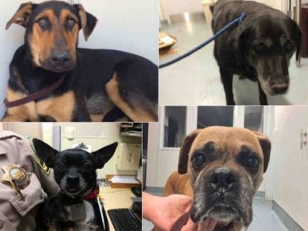 July 5, 2016 (San Diego) -- Dozens of dogs are waiting for their owners at the County’s three animal care facilities the day after Fourth of July fireworks exploded around the county. While it’s impossible to say exactly what drove each dog loose, they are known to panic at the noise and run off to escape. As of late Tuesday afternoon, 59 dogs had been brought into the shelters and more are still expected to arrive. Last year, 67 dogs came in the first few days after the Fourth of July.

The holiday is typically one of the busiest times for the County’s Department of Animal Services. Like last year, animal control officers worked the entire night to rescue lost dogs. The officers serve the County’s unincorporated areas and the six contract cities of San Diego, Carlsbad, Encinitas, Solana Beach, Del Mar and Santee.

Since then, only a handful of the dogs have been reunited with their owners. One shepherd mix is recovering from injuries after being hit by a car in the 1200 block of Euclid.

“If you’ve lost your pet, check the Animal Services lost and found web page,” said County Animal Services Director Dawn Danielson. “We post photos of animals as soon as each animal is kenneled at the shelter.”

You can also register your lost dog with Finding Rover, a free facial recognition app used by the public and County Animal Services. All you have to do is upload a photo of your lost dog and it will search its database as well as those of the three County shelters to see if any of the faces of lost or found dogs match that of your dog.

Finally, post “lost dog” signs in the neighborhood. Someone may be holding the dog to see if anyone puts up fliers.

If you find a lost dog, make sure it stays safe by trying to contain it on your property. Many times, you can lure a pet into a safe area with a treat. Once the dog is secure, contact Animal Services at (619) 767-2675 and an officer will be sent out to pick up the animal. If you aren’t in their jurisdiction, they will refer you to the proper jurisdiction.

If you’d like to microchip your dog, County Animal Services offers microchipping from 1 to 3 p.m. every Thursday at all three of its locations. The chips cost $10 each and include national registration.