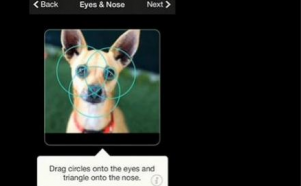 January 11, 2016  (San Diego) -- County Animal Services was the first animal sheltering organization in the nation to partner with Finding Rover and the arrangement is again showing its worth.

In the last nine days alone, the facial recognition app has reunited three dogs with their owners.

The free app uses photos to match the faces of lost dogs with those that have been found or admitted to one of the three County shelters. Owners upload a picture of their dog to the app. Shelter staff also take a picture of every dog that comes into their facilities and add it to the Finding Rover database. When the software sees a match, the app can notify the owner.

The first dog, Maxwell, had been missing for months after getting away from its caretaker. The Rottweiler mix ended up at the County’s Gaines Street facility on Wednesday, Dec. 30. Maxwell came in 9:46 a.m. and Finding Rover soon made the connection. Within four hours, his owner claimed him.

Henry ran away on New Year’s Day. His owner put up fliers and searched the neighborhood. She even called Animal Services’ emergency dispatch, but it hadn’t received any calls. The owner was really concerned because the Jack Russell terrier is diabetic and needs medication twice a day. The dispatcher, Jennifer Jordan, told her to try Finding Rover.

The owner’s 11-year-old daughter downloaded the app and by the time they got home from their search for the dog about 30 minutes later, Finding Rover emailed them to say Henry could be found at the County’s facility on Gaines Street. The owner said she could “sleep that night knowing the dog was safe and sound” at the shelter until she could pick him up.

Then Friday, Finding Rover saved the day again. The owner of a missing German Shepherd tried to find her dog on Craigslist and two pet-finding websites without any luck. As soon as she tried Finding Rover she began getting messages that her dog was at Animal Services’ care facility in Carlsbad. She picked up the pooch and said she’s amazed the app found her dog. 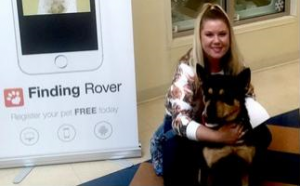 “Finding Rover gives Animal Services yet another tool for finding lost dogs in addition to ID tags, licenses and microchips,” said Animal Services Director Dawn Danielson. “Collars with ID tags can fall off and you need a veterinarian or an animal shelter to scan animals for microchips. With Finding Rover anyone with a smart phone or computer can find matches for lost and found pets.”

Finding Rover is easy to use. The app also allows you to make a lost or found poster, look for adoptable dogs and share the latest dog news. If you’d like to microchip your dog, Animal Services offers microchipping clinics from 1 to 3 p.m. every Thursday except holidays. The one-time fee of $10 includes national registration.