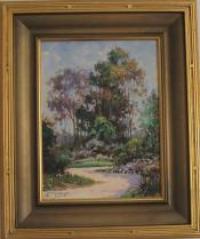 March 26, 2013 (Rancho San Diego)--An impressive array of artists will display works and be honored at a reception on Friday, April 26 from 6:30-8:30 p.m. at Heritage of the Americas Museum at Cuyamaca College in Rancho San Diego.  A percentage of all art pieces sold at the art sale, as well as 100% of proceeds from a live fine arts auction, will benefit the museum which celebrates its 20th anniversary this year.

The Chris Klich Jazz trio and flautist Jim Hannibal will perform.  Wine, beer, hors d’heuvres and desserts will also be served as the event.   A $10 suggested donation is requested for the reception. RSVP to (619)670-5194 or hofam@sbcglobal.net  to reserve space.

To read about the exceptional array of talented artists featured, scroll down.

Bob Berry is an accomplished bronze and wood sculptor, champion decoy and bird carver, and four-time world champion fish carver.  His works include the bronze sculptures of apes at the San Diego Zoo.

Todd Howe began as a custom cars painter and went on to include paintings on canvas; his favorite subjects include classic cars, nature, sports and still life.

Padre Johnson began as a Western artist while working as a cowboy in Montana. He then spent 14 years living with people in 159 nations, painting faces of people to create an exhibit known as the Global Human Family that has been featured internationally and celebrated at the United Nations. He was the first American ever invited to dislay work at the Royal Palace in the Forbidden City in Beijing, China.  He also exhibited here at the grand opening of the Heritage of the Americas Museum and is returning from Cody, Wyoming, to be here for the 20th anniversary.

Jack Jordan is best known as a local Western artist, but his paintings and career as a college art instructor also include landscape, seascape, and portrait art.  He is donating a painting, "Cuyamaca Trail" (photo, top left), valued at $1,500 for the auction in which 100% of funds raised will benefit the Museum.

Diana Kam was born and raised on Kauai in Hawaii; she has a flair for watercolor paintings of flowers, animals and landscapes, many with an Asian grace.

James Kermott is known for his bronze and wood sculptures. He classifies his work as Magic Time Bird Dogs, Western Art, and Artistic Departures.

Mark Martensen captures the soul of the old west through oil paintings and sculptures of both cowboys and Native Americans.

Chris Mummert creates both figurative and landscape art and is known for the lighting and softness evident in his works.